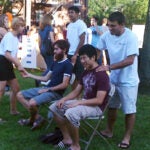 Harvard President Drew Faust, a Civil War scholar and National Book Award finalist, will officially launch the program on Jan. 10 with a lecture at the Main Library in Cambridge.  She will also deliver a lecture at the Boston Public Library’s Central Library in Copley Square on April 10.

“Harvard has been an outstanding community partner for 375 years, and I am so pleased that the University has chosen to include the entire Boston community in its anniversary celebration,” Boston Mayor Thomas M. Menino said. “This lecture series is an incredible opportunity for residents and families all across Boston to interact with some of the world’s brightest minds at their own neighborhood library.”

Harvard faculty members will discuss topics ranging from why violence has declined, to theater in the 21st century at branch libraries in the two cities. Speakers will include some of Harvard’s most prominent faculty, including Steven Pinker, one of the world’s leading authorities on language and the mind; Diane Paulus, critically acclaimed artistic director of the American Repertory Theater and a Tony Award winner; and Maria Tatar, a German cultural studies scholar who unlocks the secrets of children’s literature and folklore.

The University also will donate 400 new books to the two cities’ library systems.

“Harvard was named in honor of John Harvard’s gift of 400 books,” said Faust, “and as the custodian of the largest academic library in the world, we see this series as a celebration of the book, of the power of the libraries, and of our shared 375-year history with Boston and Cambridge.”

Harvard staff, faculty, and students also will take part in library activities aimed at children and youths, including story hours, college readiness discussions, and other events.

“This is part of an ongoing partnership between the Cambridge Public Library and Harvard that has deep roots in history and benefits so many residents,” said Susan Flannery, Cambridge’s director of libraries. “We are delighted to be partnering with Harvard again on a program that brings Harvard’s thinkers beyond campus to the community.”

Faust’s lecture at the Cambridge library is titled “Telling War Stories: Reflections of a Civil War Historian.” She will also discuss her most recent book, “This Republic of Suffering: Death and the American Civil War,” which was a finalist for the National Book Award and the Pulitzer Prize.

“We are always seeking ways to share our strengths with our Cambridge and Boston neighbors, and how better to do that than by bringing Harvard thinkers to our local libraries,” said Christine Heenan, vice president of Harvard Public Affairs & Communications.

For more information on the series, including the names of the faculty speakers, the lecture dates, the locations, and the activities, visit http://375.harvard.edu/john-harvard-book-celebration.