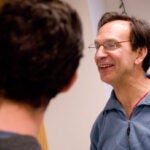 Reaping benefits of exercise minus the sweat

Participation in marathon and half-marathon races is at an all-time high, but numerous reports of race-related cardiac arrests have called the safety of this activity into question.

A new study finds that participating in these races actually is associated with a relatively low risk of cardiac arrest, compared with other forms of athletics. An analysis of 10 years of data, appearing in the Jan. 12 New England Journal of Medicine, reveals that most of those experiencing cardiac arrest during marathons and half-marathons had undiagnosed, pre-existing cardiac abnormalities.  Male marathon participants accounted for most cardiac arrests and appear to be at increased risk. The study also identifies bystander-initiated cardiopulmonary resuscitation (CPR) as a key factor in patient survival.

“This study provides the first accurate, comprehensive characterization of cardiac arrest and sudden cardiac death risk in this population,” says Harvard Medical School Assistant Professor of Medicine Aaron Baggish, who is director of the Cardiovascular Performance Program in the Massachusetts General Hospital (MGH) division of cardiology and senior author of the study. “The general consensus — based on intense media coverage of cardiac arrests that happen during these races — has been that the risk was very high.  But we found that the risk of cardiac arrest for marathon and half-marathon runners is equal to or less than the risk for other athletes — including triathletes, college athletes, and casual joggers.  This finding provides important reassurance that this is a generally safe and well-tolerated activity.”

The authors note that, while several studies have examined sudden cardiac deaths in young, competitive athletes, there had been no comprehensive study of marathon participants, who are often older and may have unknown underlying medical conditions.  They prospectively compiled a database of cardiac arrest cases occurring during or at the finish lines of all U.S. marathons and half-marathons from 2000 until mid-2010.  Letters were sent to survivors of each cardiac event — or to the next of kin for cardiac deaths — requesting their participation in the study.  Those agreeing to participate completed an extensive interview process examining demographic data, personal and family medical history, cardiac risk factors or previous diagnoses, and information about the cardiac event. Complete medical records, including post-cardiac arrest testing and autopsy data, were collected and analyzed whenever possible.

Out of almost 11 million registered participants in the races documented during the study period, the research team identified 59 cardiac arrests — 40 at marathons and 19 at half-marathons.  More than 85 percent of the cardiac arrests took place in men. While the overall incidence of cardiac arrests during the study period was stable, the risk among male marathon runners rose significantly over time.  Of the 59 cardiac arrests, 42 were fatal. This 71 percent mortality is markedly better than the usual 92 percent rate for out-of-hospital arrests, probably because of the presence of spectators and on-site medical services that facilitate rapid response, the authors note.

Among the 31 affected runners for whom detailed medical information was available, 23 had died — 15 of whom had definite or probable hypertrophic cardiomyopathy.  This abnormal thickening of the heart muscle is the most common cause of sudden cardiac death in young athletes but previously has not been considered an issue in the older running population. Nine of those who died had additional cardiac abnormalities. Among cardiac arrest survivors, underlying coronary artery disease was the dominant pathology, but no participants with coronary disease had any evidence of acute coronary plaque rupture.  Factors most strongly associated with survival were rapid initiation of CPR by bystanders witnessing the event and a diagnosis other than hypertrophic cardiomyopathy.

“The lack of plaque rupture — a critical event in many heart attacks — was an intriguing and surprising finding,” Baggish says.  “It suggests that the kind of underlying disease that causes cardiac arrest in distance runners may be detectable by a simple stress test prior to race day.  Our next steps are to investigate strategies for pre-race runner education and heart disease screening and to study the contribution of specific risk factors in more detail.  A big take-home message of the study is the importance of bystander CPR, which is a relatively simple skill that can be learned by everyone in the community.  Recognition of this important finding calls us all to action, and we will be offering the first-ever CPR education session for runners, family members, and spectators at this year’s Boston Marathon.”