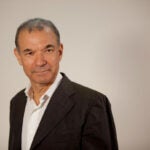 A key to modernity

Anatoly Smeliansky’s resonant voice, wrapped in a rich Russian accent, lends him a certain gravitas, but his eyes shine. He conveys at once sweetness and seriousness, and the sense that he fights for what he loves: the art of acting.

When asked why acting is so important, he responds with a knowing chuckle that makes his point.

“It’s among those questions like, ‘Why is laughing important?’ There is no answer. We love it.”

One of Russia’s most distinguished theater scholars, Smeliansky is the founding director of the American Repertory Theater (A.R.T.)/Moscow Art Theater School Institute for Advanced Theater Training at Harvard University. As part of the program, he is spending the month at Harvard leading a series of classes on the history of theater and drama.

During a recent session, with the American Repertory Theater’s lobby serving as an impromptu classroom, Smeliansky connected the political situation in Russia and recent anti-government demonstrations to the nation’s wave of “dark” dramatic productions.

Two new Russian stagings of Anton Chekhov’s “The Seagull,” he said, make earlier versions of the work appear “rosy” by comparison and are likely a reflection of a sense of broad societal despair. But with the protests, Smeliansky sees signs of a new direction for the country, and the arts.

“Russia has gotten back, for the first time, some kind of perspective of real freedom, of real democracy … it’s good news for Russia.”

Before and after the class, the program’s first-year students welcomed Smeliansky back to the A.R.T. with bear hugs and warm Russian greetings.

“He’s just a remarkable man; he is just full of wisdom,” said first-year A.R.T. Institute student Henry Austin Shikongo. “The amount of his generosity, and spirit and heart … is just something you don’t see very often.”

Those qualities have made Smeliansky, longtime associate director of the famed Moscow Art Theater, a more effective teacher. He has helped students in the Harvard program develop their talent by teaching them about the history of the craft.

Teachers from the Moscow school also visit Cambridge to teach classes and offer instruction. The two-year, five-semester graduate training program includes a three-month residency at the Moscow institution, where students perform a play on one of its three stages. Students who graduate from the program receive a master’s degree from the Russian theater school.

While in Cambridge, Smeliansky will offer insights into the minds and methods of 20th-century giants such as Bertolt Brecht, Gordon Craig, Michael Chekhov, Henrik Ibsen, and Samuel Beckett.

Another name on Smeliansky’s list is Constantin Stanislavski, a co-founder of the Moscow Art Theater whose theories and techniques emphasizing a psychological approach to acting led to the method school.

But by studying his critics, and the ways he continuously sought to refine his teaching techniques, students get a better, fuller understanding of Stanislavski and his system, said Smeliansky.

“The last couple years of his life he completely started the method from scratch. … The truth of Stanislavski is the truth of any great artist; they are not an answer — they are a question for us, that’s the point.