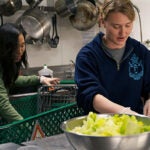 Students give homeless a break

The Ceramics Program at the Office for the Arts at Harvard recently donated a handmade mural to the Harvard-affiliated Cambridge Health Alliance (CHA). The mural’s installation was celebrated at a Jan. 25 reception and featured contributing artists and participants from the program, including Rosanna Bonnet, Elissa Freud, Tina Gram, Marek Jacisin, Cathy Moynihan, Stephanie Osser, Arlene Wang, Pam Ward, and Allison Newsome, an instructor for the Ceramics Program who led her students in creating the artwork for CHA.

“The mural will bring a human touch to the high-tech hospital environment,” said Newsome. “Cambridge Health Alliance was chosen for this project because it is a community hospital that works with courage and determination to serve the needs of a very varied and underserved population. It is good to give back to those who give.”

Newsome’s group of students created the mural over six months utilizing indigenous clay from local historic brick manufacturer Stiles and Hart Company.  The students incorporated the clay in the center tile for each vignette of the mural, serving as the “heart” of each section of the creation. The mural was installed outside of CHA’s Women’s Health Center for visiting patients and their families to view, as much of the art reflects the diversity of CHA’s patients and the Cambridge community.

“The collaboration of the Office for the Arts Ceramics Studio and Cambridge Health Alliance is a wonderful example of our Community Arts Partners initiative — building bridges between Harvard and host communities through the arts,” said Cathleen McCormick, director of programs at Office for the Arts at Harvard. “We are grateful to instructor Allison Newsome, studio artists, and CHA for making this happen and hope patients enjoy seeing the work, which they can also touch.”