Worming out of listening 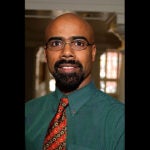 Worms, apparently, have no appreciation for great music.

They have no appreciation for other noise either, since they pretty much simply lie in the dirt despite students’ shouts, drumming, and repeated playing of a piano note, loudly.

“Worms do not possess any sense of hearing, I think we confirmed that,” said Ned Friedman, Arnold Professor of Organismic and Evolutionary Biology and leader of the freshman seminar “Getting to Know Charles Darwin.”

Friedman, five students, a research assistant, and a teaching fellow were in an unlikely location to replicate a Darwinian experiment involving earthworms: the Music Building.

Crammed into a small basement room that itself was jammed with chairs and two pianos, Friedman and teaching fellow Jesse Weber on Nov. 16 re-created one of Darwin’s last experiments, to see if earthworms can hear. He detailed the experiment in his book “The Formation of Vegetable Mould Through the Action of Worms, With Observations on Their Habits,” published in 1881, a year before his death.

Though the book might seem an odd finale for a man known for a sweeping theory explaining the fundamental mechanism guiding the development of life on Earth, Friedman said the book actually was right up Darwin’s alley, espousing the important theme of gradual changes over long periods — in this case describing the worms’ ability to build layers of soil.

In addition, partly because of a writing style that appealed to a popular audience and partly because by then Darwin was a “rock star,” as Friedman put it, the book was a runaway hit, outselling even “On the Origin of Species.”

The course, offered for the first time this fall, results from Friedman’s own passion for Darwin coupled with his arrival in January from the University of Colorado to become director at the Arnold Arboretum. A botanist whose research focuses on the evolution of plants and relationships between them, Friedman over the years has become increasingly fascinated with the man whose theories underlie his own work.

Friedman designed the seminar to familiarize freshmen with Darwin, who was a towering figure in modern science, yes, but also a dedicated family man, a tireless correspondent, and a scientist whose theories were informed not just by deep thinking about his journey aboard the ship Beagle, but also by experiments conducted throughout his life.

“It’s probably the class that I look forward to every week. It’s fun, and very innovative,” said freshman Tess Linden. “I had a lot of misconceptions about Darwin, coming in. The class is called ‘Getting to Know Darwin,’ and that’s what we did.”

Classmate Ned Whitman echoed Linden’s sentiment. It was surprising “how much he used evidence and observation,” Whitman said of Darwin. “He wasn’t just a fanatic, thinking we evolved from bacteria without evidence.”

To learn more about Darwin the experimentalist, students re-created 10 of Darwin’s experiments over the semester. They also read his letters and selections from his books, including the passage that describes worms and music.

“Worms do not possess any sense of hearing,” Darwin wrote. “They took not the least notice of the shrill notes from a metal whistle, which was repeatedly sounded near them; nor did they of the deepest and loudest notes of a bassoon. They were indifferent to shouts, if care was taken to ensure that the breath did not strike them. When placed on a table close to the keys of a piano, which was played as loudly as possible, they remained perfectly quiet.”

Darwin went on to say that worms, while stone-deaf, are very sensitive to vibrations and pulled back into their burrows when their pots were placed on top of the piano that was then played.

The worms in the Music Building may not have read Darwin’s book. Kept on ice for freshness, they were a bit sluggish, barely responding to vibrations when placed on the piano. They also forgot to ignore the music entirely, as Darwin had observed. Of course, they could have also been responding to the excited faces gathered around the pots, or the wisecracks that flew about.

Besides worms, students re-created experiments involving everything from barnacles to a visit to Boston-area pigeon fanciers. They planned to cap off the semester with a grand feast, using recipes from Darwin’s wife Emma’s cookbook. Though this last event was more meal than science experiment, students understood enough about Darwin to know the perilous ground they were planning to tread: Darwin regularly complained of stomach and digestive ills, perhaps traceable to Emma’s delicacies.