When plants may not help 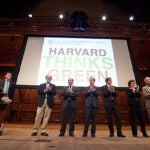 Planting a tree is always a good thing, right? After all, trees provide natural beauty and wildlife habitat, and are good for the environment.

But what if, instead of one tree, you’re planting a million trees? Or 10 million? Or 100 million?

Such massive expansion of forest cover in North America and Eurasia — proposed by some analysts as a way to combat climate change — could have the surprising effect of altering the environment by increasing temperatures in some parts of the world, resulting in changes in rainfall patterns across the globe, Harvard researchers say.

The research, described in the Proceedings of the National Academy of Sciences on Dec. 5, found that “we can’t plant our way out of the (climate) problem,” said Abigail Swann, Giorgio Ruffolo Post-Doctoral Fellow in Sustainability Science, and the paper’s lead author.

“There are lots of reasons why planting trees is a good thing,” Swann said. “There are many local benefits. But when you think about it as a global-scale climate mitigation strategy … we need to think about what some of the side effects would be.

“The trees would soak up carbon, but the changes in rainfall patterns would cause the Amazon forest to be less productive,” Swann added. “The surest way to mitigate climate change is to reduce emissions directly, rather than trying to plant trees.”

Studying worldwide climate changes, however, is easier said than done.

To do so, Swann turned to a computer and the Community Climate Model, maintained by the National Center for Atmospheric Research in Boulder, Colo. Using the model, she explored the effects of replanting all the agricultural fields and grasslands in North America and Eurasia with forests. The results were not encouraging.

Swann demonstrated that, while new forests would soak up carbon from the atmosphere, the addition of millions of acres of new forest would actually increase temperatures where there is not sufficient soil moisture to support the tree demand, leading to changes in atmospheric circulation and in rainfall patterns.

As unlikely as the idea sounds, Swann said the possibility of replanting forests across vast swaths of North America is more likely than many may think.

“Most of the corn produced in the U.S. goes into producing ethanol,” Swann said. “If there is a switch from corn-based to cellulosic ethanol, there could be significant amounts of agricultural land that we might consider replanting as forest.

“That being said, I think the central finding of this paper is that there are many complications with using forests to plant your way out of the problem,” Swann continued.

“You don’t get much benefit in terms of lowering global temperatures, and you have a number of remote side effects from increasing forest cover,” Swann said. “This paper is more of a warning that we need to think this problem through more carefully, if we are going to go ahead with something like this as a mitigation strategy, and reducing emissions directly is a much better way to remove carbon from the atmosphere.”