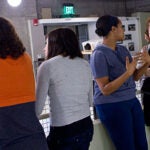 Joseph B. Martin has kept a journal since 1978. Some of the resultant leather-bound books hold minutiae — from records of lunch meetings to calls, musings, and spontaneous ideas. But other logbooks, deeply private, were never shared, so when he decided to write a memoir, he turned to the volumes in which he’d documented his life.

“My family … emigrated from Switzerland to Pennsylvania to Canada, but my parents never took Canadian citizenship,” he said. “So I was born a dual citizen, which was very convenient to move back and forth across the border. I call myself an American with Canadian roots.”

“But as I kept writing, I started to develop thoughts about academic leadership — leading by listening — and I realized there were some lessons I’d learned along the way that might be valuable.”

Growing up in Duchess, Alberta, a remote Mennonite prairie town, gave Martin a humble, relatable quality that’s unmistakable in his professional life and writing. There are passages in his book about his boyhood dog, and a near-death experience involving a fall from a horse. And Martin peppers the book with family photographs of the idyllic countryside he roamed until going away to the University of Alberta at age 16.

“My teachers could see I was bored, and skipped me,” he said. Martin knew he wanted to be a doctor from the get-go. “My earliest memory,” he recalled, “is walking across a field when I was 4 or 5 years old and thinking, ‘I want to be a doctor, I want to help people.’ And I wasn’t trying to escape my community, but I really had a passion, led, in part, by hearing the stories of the missionaries who came through our community from Africa, India, where they’d been working.”

By his own admission, Martin was an awful university student. “That first year, I went home for Canadian Thanksgiving, and I didn’t want to go back. I was petrified. I flunked my first English paper, I flunked my first physics exam,” he said. “I thought it was all over. But by the end of the year, I was able to pick up and pass. I started medical school two years later, and by that time I was first in the class.”

Martin’s career has taken him from McGill University to Massachusetts General Hospital (MGH) to the University of California, San Francisco (UCSF), where he served as chancellor. Harvard President Neil Rudenstine wooed Martin from UCSF to become dean of Harvard Medical School (HMS) in 1997, a job Martin made clear he never expected, nor necessarily wanted.

“At MGH, I’d observed the dean’s role … I thought it was a terrible job. I said to my wife, ‘That’s a job I’ll never take.’ But as chancellor of UCSF, I missed the close relationships with students and faculty, and I was missing the fun of teaching,” he said.

Martin’s deanship has been heralded for unifying a fragmented HMS, improving communication, encouraging collaboration, and diversifying departments, all while leading the School under three very different Harvard presidencies.

“I’ve read many academic memoirs, and I didn’t want to write another one that pontificated about my accomplishments, but about the process of how you get things done,” said Martin. “Academic leadership is hard and erratic and complicated by the big egos that you work with, and some things go well and some things flunk. And I wanted this book to be a personal illustration of how those things arose, and were dealt with, and walked away from if they weren’t working.”

Martin stepped down in 2007, after a decade-long tenure highlighted by Martin and his team successfully locating the gene for Huntington’s disease, an extraordinary moment for him.

“One of my principles of leadership is that you do your best work within the first decade,” he said. “I’ve always felt that the leadership of the most effective sort is not ostentatious, it’s not using the bully pulpit to advertise who you are, but to use your position to try to make the community in which you work a better place.”