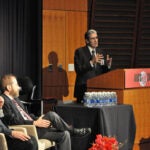 Plotting the demise of AIDS

Serious traumatic injuries, including major burns, set off a “genomic storm” in human immune cells, altering around 80 percent of the cells’ normal gene expression patterns.  In a report to appear in the December Journal of Experimental Medicine, members of a nationwide research collaborative describe the initial results of their investigation into the immune system response to serious injury, findings that overturn some longstanding assumptions.

“We have discovered there is a highly reproducible genomic response to injury that is essentially the same — no matter the patient’s individual genetic background, whether the injury was caused by major trauma or serious burns, or if recovery is rapid or complicated,” said Ronald G. Tompkins, director of the Sumner Redstone Burn Center at Massachusetts General Hospital (MGH) and principal investigator of the study. “When this project was organized more than a decade ago, the question was raised whether responses would differ so much from person to person that no patterns would appear. It is amazing how similar our responses to injuries like serious burns or trauma actually are.”

Tompkins is the Sumner M. Redstone Professor of Surgery at Harvard Medical School.

The Inflammation and Host Response to Injury consortium was established in 2001 to investigate how the human body responds to injury and what factors set off excessive, uncontrolled inflammation that can lead to sepsis or multi-organ dysfunction syndrome, a life-threatening failure of vital systems. To lay the groundwork for further studies, the research team analyzed whole-genome expression patterns in white blood cells from 167 patients being treated for severe trauma at seven U.S. hospitals. Blood samples were taken within 12 hours of the injury and several times during the next 28 days. Gene expression pattern changes were tracked and compared with samples from 133 patients treated for serious burns, 37 healthy controls, and four volunteers treated with a bacterial toxin that produces brief flu-like symptoms.

The genomic changes seen in the trauma and burn patients were essentially the same, with immediate increased expression of pathways involved with inflammation and with the first-response innate immune system along with simultaneous suppression of adaptive immune pathways.  Over time these patterns changed only in terms of intensity and duration, which runs counter to a widely accepted theory that the initial pro-inflammatory response would be followed by an anti-inflammatory response that opens the door to complications such as sepsis and organ failure. Instead, the only differences between patients with and without complications were in the magnitude of gene expression changes and how long they lasted. Even the volunteers who received bacterial toxin, whose symptoms lasted for only 24 hours, had similar changes in 40 percent of the gene pathways that were altered in the seriously injured patients.

“Burn patients may take months to years to recover from their injuries, while trauma patients who are going to recover usually do so within a month. So it was entirely unexpected that gene expression patterns in burns and trauma patients changed in exactly the same directions 91 percent of the time,” Tompkins said. “Also if you consider two patients with identical injuries from a serious auto accident — a 20-year-old who is ready to go home in a week and a 55-year-old who is still in the ICU and on a ventilator at the same point in time — it would be logical to think that the complications suffered by the older patient must have a genome-based difference.  But it turns out that the gene expression changes are the same, and the only difference is how much they change and how soon they return to normal.

“With this knowledge we can begin to design therapies to promote improvement in patients who would otherwise have complicated recoveries,” he added.  “We also can look at whether measuring genomic changes soon after injury can help us predict which patients will recover well and which will need the maximal treatment typically delivered in ICUs, which, in addition to being expensive, can sometimes be harmful.”