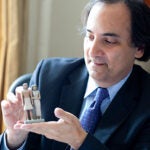 The future of archaeology

At 81, Frederick Wiseman is the American dean of the documentary genre known as direct cinema. Since 1967, he has made nearly a film a year — documentaries meant to reveal the diversity of experience, including tragedy, humor, humiliation, humdrum, and even horror.

Wiseman, peppery and lean, was at Harvard on Dec. 1 to deliver a witty, illustrated primer on how to shoot, edit, and “read” a documentary. He spoke before a packed audience at the Radcliffe Gymnasium, delivering the Julia S. Phelps Annual Lecture in Art and the Humanities, sponsored by the Radcliffe Institute for Advanced Study.

You can’t get advanced training in filmmaking in an hour and 24 minutes, the time Wiseman took at the podium. But you can gain insights. For starters, don’t expect to hear any pronouncements in the language of film criticism, which he professes not to understand.

“There’s an enormous amount of (expletive deleted) about documentary film,” he told one questioner, “and I try not to participate in it.”

Wiseman was equally dismissive of his career before films. Speaking of his time at Yale Law School, he said, “I was physically present.”

But it was the law that, in a way, led him to make his first documentary film, “Titicut Follies,” a journey of relentless shocks. The title refers to a talent show put on by the inmates of Bridgewater (Mass.) State Hospital, a correctional institution that in 1967 housed the criminally insane — some of them kept naked and ranting in cells. It was a place where Wiseman would take his Boston University law students, a field trip designed to show them the fate of some of their clientele.

His films since then have been about institutions both dark and light, including one that he called a logical follow-up to a film about a place for the insane: a high school. He has also plumbed a zoo, a park, a hospital, a police precinct, a welfare office, and a public housing complex. But don’t call him one-sided, or a chronicler of the downtrodden, said Wiseman. He’s after the complexity, ambiguity, and diversity of impressions you might derive from a play or a novel — art forms to which he compares his films.

But Wiseman’s talk wasn’t long on personal history; it was long on technique. How, exactly, do you make a documentary film? How do you research, shoot, and edit a product meant to give the viewer an illusion of actual experience in a certain place?

His idea of research is nonconformist, and might involve a day or a half-day. “The shooting of the film is the research,” said Wiseman, who prefers showing up at a school or an office or a hospital knowing very little about it. At the end of the day, he watches silent rushes, and lets the structure of the story and its characters emerge from the reality of what he sees. “I show up at a place,” he said in a summary of his technique. “The analogy for the process is Las Vegas. It’s a crapshoot.”

But Wiseman knows how to throw the dice. He uses a small crew (he handles the sound, and by instinct names the shots he wants). Working alone, he lets the rushes reveal a story. And postproduction is slow and long. Shooting might take a few weeks or a month. Editing can take a year.

“Part of the fun of doing it is the surprise,” said Wiseman of his instinctual shooting and slow editing. In the end, he added, the intention is to create “a dramatic structure out of ordinary experience.”

That ordinary experience — captured in the film clips he used to illustrate his talk — can be troubling. In “Law and Order” (1969), a burly police officer is pictured choking a prostitute during an arrest. (Wiseman, alert to ambiguities, refused to condemn him.) The scene is proof, he said, that a camera does not change behavior, and that “most of us think our behavior is appropriate for the situation we are in.”

That ordinary experience can also be mesmerizing, as in the six-minute “night crawl” scene in “Basic Training” (1971). Faced with five hours of rushes, Wiseman had to compress what was literal about the training — camouflage, silent communication, traversing barbed wire — and what abstractions it evoked. He chose the metaphor of dance. The music score was dual: the sound of crickets, and then the sound of machineguns.

The ordinary experience that Wiseman honors can be wistful and funny too. He used the opening sequence of “Welfare” (1975) to illustrate both the continuity of his shots and a needed lesson at the time: that public benefits go to a variety of races, not just one. We see clients getting their welfare mug shots and a visual medley of people waiting, most of them well dressed. In the first “talk sequence,” said Wiseman, a man has a loud complaint that eases into a conversation, which shows how public offices can include moments of private human intimacy. Then a homeless couple’s plea for help becomes a comic riff on marriage. “Any documentary filmmaker,” Wiseman said later, “runs into a lot of funny material.”

And that ordinary experience can be both visually gorgeous and suggestive of tedium. In “Belfast, Maine” (1999), a film about a sardine factory, little fish in silvery streams slip and flush through stainless steel troughs. It’s a trip to death, snipping, and being sealed into cans. With them in the noise and the steam are the workers, steady and grim-faced, and wearing hairnets. “You begin to feel,” said Wiseman, “what it’s like to work there.”

After the talk, you begin to feel what it is like to make documentary films. And along the way, Wiseman offered related wisdom for filmmakers. Permission? Just ask. Video or film? It doesn’t matter, said Wiseman, who has shot two recent films on HD, his first foray into the digital realm. “It still takes me a year to edit a film.”

Along the way, he added, stay organized. Wiseman enters each shot into a log, along with every camera roll, sound roll, and edge code. “It’s the only area of my life I’m meticulous about,” he said.

The elderly Wiseman said he had reached a point “where I can hardly remember my name — but I remember all my rushes.” He ended with a story from making “Near Death” (1989), a film about an intensive care unit. It required Wiseman to visit the morgue, where he became friendly with a supervisor. On his last day of filming, Wiseman thanked the supervisor for helping. The morgue director replied, “See you soon.”