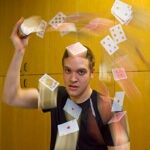 Creator of the beloved soap operas “All My Children” and “One Life to Live,” Nixon was revolutionary in founding a whole new genre of television and was the first to integrate soap operas with persons of different ethnic and cultural backgrounds. The highlight of her Harvard visit will be an open-to-the-public session in which students, in an “Actor’s Studio”-style format, will interview the television pioneer before a live audience on Dec. 6 at 4 p.m. in the Farkas Hall theater. The Harvard community and friends are invited to attend.

“The students and faculty of the Harvard Foundation are honored to have Ms. Nixon come to Harvard University where her work is greatly admired and respected,” said S. Allen Counter, director of the Harvard Foundation and professor of neurology at Harvard Medical School. “As a revolutionary force in television, Ms. Nixon not only defined a genre, but also helped to enact important social change in the entertainment industry by introducing social issues and characters of all cultural and ethnic backgrounds into her shows. We look forward to having Ms. Nixon share her artistic experiences and outstanding accomplishments with the Harvard community.”