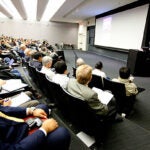 With half of all U.S. garbage still going into landfills, plastic recycling “a mess,” and public opposition blocking construction of more trash-to-energy plants, the nation’s waste disposal system has a lot of problems but few answers, the author of a new book said Dec. 1.

Samantha MacBride, an adjunct assistant professor at Columbia University’s School of International and Public Affairs and author of “Recycling Reconsidered: Present Failure and Future Promise of Environmental Action in the United States,” described what happens to all the stuff people leave on the curb each week and showed that, for plastics in particular, recycling isn’t the solution once envisioned.

While recycling for yard waste totals nearly 60 percent, paper 63 percent, and car batteries almost 100 percent, recycling of plastics is stuck at just 8 percent. That’s because manufacturers produce a bewildering array of plastics — polystyrene, polyvinyl chloride, and high-density polyethylene, to name a few — that can’t be mixed if they’re to be effectively recycled. In fact, she said, the seven types of plastics denoted in the recycling symbols stamped on milk jugs, salad trays, and other containers barely scratch the surface. That’s because category seven is an “all other types” category. The Environmental Protection Agency lists 40 types of plastic.

“Plastics are a big, messy, difficult problem,” MacBride said. “It is not a simple subject with no simple answers.”

MacBride was at Harvard to discuss “Products, Plastics, Putrefaction, and Power: Rethinking How We Manage Materials to Achieve Just Sustainability.” Her appearance was part of the Peabody Museum of Archaeology and Ethnology’s Trash Talk lecture series.

Half of U.S. waste is disposed of in some 2,400 landfills. Though the landfills are greatly improved from those of decades ago, with liners, equipment to capture methane gas, and leachate disposal systems to keep decomposing refuse from spoiling the surrounding environment, almost nobody in the field believes that burying that much trash is a long-term solution, MacBride said.

Trash-to-energy plants, which burn garbage to generate power, can be quite clean, MacBride said, with equipment to scrub toxins from emissions. They also have the advantage of being able to handle mixed garbage, though their emissions do include carbon, a concern amid fears of climate change. Public opposition since their heyday in the 1980s, however, has halted construction of such plants, keeping the nation’s inventory of them at 100.

Just over a quarter of the 250 million tons of waste generated annually in the United States is recycled. Though sorting some materials, like metal and paper, can be done automatically, plastic has to be sorted by hand, MacBride said.

Bottle deposit laws, in effect in 10 states, have proven effective at promoting recycling, with nearly 100 percent returns in Michigan.

The latest addition to the municipal waste disposal scene, MacBride said, is composting. Some states, like Massachusetts, mandate composting of yard waste, while a handful of municipalities are beginning to gather food waste and dirty paper for disposal in municipal composting facilities.

Another development on the horizon is high-temperature conversion of waste through the pyrolysis-gasification processes that produces synthetic gas that can be burned as fuel or converted chemically into other substances. Though there is great excitement about this process, MacBride said, it is still very expensive and so is financially risky for waste disposal companies.

Many environmentalists advocate a more holistic approach, MacBride said, that considers how an item will be disposed of before it is acquired, and that substitutes natural materials for synthetic ones and avoids problematic sources like plastics entirely.