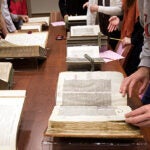 It is sometimes said that youth is wasted on the young. It also could be said that college sometimes is wasted on students, and that only after graduating does a former student come to appreciate learning. For those wishing to revisit the college classroom, or those who never had the opportunity, there is “The Harvard Sampler: Liberal Education for the Twenty-First Century.”

In the spirit of the General Education curriculum, this book of essays gives a taste of the modern Harvard curriculum. The authors, who are among the University’s most respected faculty members, invite visitors to explore subjects as diverse as religious literacy and Islam, liberty and security in cyberspace, medical science and epidemiology, energy resources, evolution, morality, human rights, global history, the dark side of the American Revolution, American literature and the environment, interracial literature, and the human mind.

The instructors, who include such premier scholars as Steven Pinker, Laurel Thatcher Ulrich, and Harry R. Lewis, summarize key developments in their fields in ways that both entertain and edify.