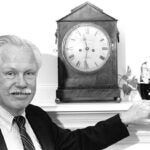 David Rosenthal, who for 23 years has led Harvard University Health Services (HUHS) in providing care to more than 32,000 students, faculty, staff, retirees, and their dependents, is stepping down at the end of the academic year to care for cancer patients full time.

Rosenthal, the Henry K. Oliver Professor of Hygiene and professor of medicine, has served under four Harvard presidents and oversaw a major modernization of HUHS during the 1990s and early 2000s that included both physical renovations and the addition of an electronic medical records system.

“Doctors’ offices were their office, their consulting room, and their examining room. It was just one room, and it was an old hospital room,” Rosenthal said. “The entire HUHS has been totally renovated.”

He also has directed a renewed campus emphasis on wellness, with a focus on nutrition (in collaboration with Harvard University Dining Services), on increased physical activity (promoted through programs like Harvard On The Move), and on stress and symptom management.

“David Rosenthal has watched over Harvard’s health for more than two decades. We owe him an immense debt of gratitude for the healing hand with which he has guided our community’s well-being,” said Harvard President Drew Faust.

Rosenthal graduated from Harvard College in 1959 and received his M.D. from Tufts Medical School in 1963. In 1989, he was an associate professor of medicine at Harvard Medical School and a physician specializing in cancers of the blood at Brigham and Women’s Hospital when then-HUHS Director Warren Wacker retired. Rosenthal skipped a planned sabbatical in England in order to assume the HUHS directorship. Rosenthal said he initially thought he’d stay on for 10 or 15 years. By the time those years had elapsed, he was so busy that he didn’t consider leaving, he said.

In addition to his duties guiding HUHS, Rosenthal has served as president of the American Cancer Society and is the medical director at Harvard-affiliated Dana-Farber Cancer Institute’s Leonard P. Zakim Center for Integrative Therapies. After he leaves HUHS, Rosenthal plans to spend more time with patients at the Zakim Center, working to design therapies that help them tolerate both the effects of their illness and of the powerful drugs used in cancer care.

Provost Alan Garber, who has known Rosenthal for many years, said Rosenthal has served the Harvard community well.

“I have known David for 30 years; he is a master clinician, teacher, and a physician with deep empathy,” Garber said. “He has served with distinction for the past 23 years, and I thank him for all he has contributed to the health of the Harvard community.”

Executive Vice President Katie Lapp praised HUHS’ development under Rosenthal’s leadership and added that, although Rosenthal is stepping down, he won’t be far away.

“Dr. Rosenthal has led Harvard University Health Services for 23 years, and he has been at the forefront of patient-centered health care. Under his leadership, Harvard has developed a multi-specialty medical practice for faculty, students, and staff; delivered exceptional patient service; and created the Center for Wellness,” said Lapp. “Even as he leaves HUHS, we know he will be nearby, over the river at the Dana-Farber Cancer Institute, where he will be continuing his work to improve patient health.”

Rosenthal said the Harvard community is by and large a healthy one, but that in a high-performance organization like this, stress and anxiety management will be a challenge going forward. Other challenges facing his successor will be continuing to keep the University physically healthy and giving adequate attention to behavioral health, Rosenthal said.

“I am proud of all that we have accomplished together at HUHS. We have experienced many challenges throughout the years, and implemented many new programs and initiatives,” Rosenthal said in a letter to HUHS staff announcing his departure. “I thank each of you for all that you’ve done to help make HUHS a wonderful and important service to the Harvard community. It has been a true pleasure to work with you.”