Knitting toward a purpose 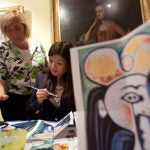 After working as executive assistant to Harvard College Dean Evelynn M. Hammonds for two years, Marie Dach is now in a similar post with the provost. But it’s her new position as a resident tutor for Pforzheimer House that is having a broader ripple effect, not only for the residents, but also for those in need in the Harvard community.

As one of two resident tutors who focus on sexual assault and harassment, Dach wanted to find a weekly forum in which students could discuss challenging subjects openly.

“It can be a scary topic,” Dach said. “I wanted to find a way to address it in an upbeat and casual way that would put a different twist on the topic. So I came up with the idea of organizing a weekly knitting circle that would allow people to talk about all sorts of issues relating to relationships. Those kind of personal stories often led to discussions of aggression, different cultures’ views on women, images of women in pop culture, and so on. I found that the knitting group sort of opened us up to these topics in a way that was very open and very nonthreatening.”

Marie’s husband, Neal Dach, is a second-year Ph.D. student in neuroscience at Harvard’s Graduate School of Arts and Sciences, and is the Pforzheimer resident tutor for neuroscience and public service.

“I happened to be meeting with Neal’s public service team one day, and they were discussing the possibility of having an event that would benefit one of the local homeless shelters or women’s shelters,” Dach said.

“I realized that in addition to the knitting circle establishing an environment where people could talk freely about relationships and other issues, we could also turn the group into something even more productive. We could actually make items and donate them to women’s shelters, or we could sell the items and donate the proceeds to a woman’s shelter. I brought the idea to the students at the knitting group, and they really loved it. So now there’s this whole new goal to the program: to not only create opportunities to discuss this complex subject, but also do what we can to help women who are in challenging situations.”

This semester, the group will donate knitted items to the Harvard Square Homeless Shelter. “We’re working closely with the Pforzheimer public service team to hand-distribute the items, rather than just dropping a box off,” Dach said. “We’d like to be able to see where the projects are going and interact with the people who are receiving the items.”

While the knitting circle only began in October, word about the group, currently made up of about eight Pforzheimer students, is beginning to spread. “I’ve just heard from a student in Currier House — he’d be our first guy in the group, so we’re really excited about that — who would like to joins us. And he would be our first person from another House, so hopefully that will catch on so we can expand and become a quad-wide knitting group.”

For Dach, who is seven months pregnant with the couple’s first child, the Pforzheimer House community has changed her Harvard experience.

“The other tutors, and of course my husband, have been phenomenally supportive,” Dach said. “They know I work full time, I’m pregnant, and so I can be a little tired at times. But even though we’ve only been here since August, it’s hard for me to remember life before we moved to Pforzheimer. That part of my life is just sort of a blur. This is really our home.”