Inspired by their stories 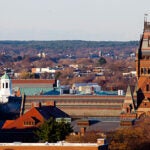 The bright desktop sticky notes with an hour-by-hour schedule, the color-coded Google Calendar open on my browser, and the running tally of deadlines all tell the story: I’m a planner.  Of course, that’s not to say that I always (or even often) stick to the plan.  It’s just comforting to have an idea of what I need to accomplish (and it’s fun to procrastinate by putting together the lists). Seriously, though, I am not exactly a spontaneous person.

So how is it that in a few weeks, when most of my friends will be embarking on the once-in-a-lifetime experience that is senior spring, I’ll be starting my internship for President Barack Obama’s reelection campaign in Chicago?  Leaving college a semester early was not part of my plan. (I finished most of my studies in seven semesters, will complete my senior thesis in history and literature this spring, and will return to graduate with my class.)

Recently, as I have consulted desperately with family, friends, and advisers about this departure, I have found myself gravitating toward Harvard’s Institute of Politics (IOP).  I began spending time there the first week of my freshman year.  It is not only where I cultivated my passion for public service, but also where I heard from countless people that life is about doing what you love and taking opportunities as they come to you.

At a dinner for undergraduates, I met David Axelrod, a key Obama adviser, who spoke frankly about his career and emphasized the importance of working for causes and people in whom you believe.  I tutored a Harvard staff member from El Salvador for his U.S. citizenship exam, which reminded me that I was privileged to be an American citizen.

Moreover, I gained invaluable mentors. I’m still in touch with Stephanie Cutter, an IOP fellow who currently serves as Obama for America’s deputy campaign manager.  And the expert IOP staff members are always willing to talk about their experiences and brainstorm ideas.  I was able to put a face (well, many faces, really) to government, which made the political process more human and accessible.

As my interests developed, the IOP helped connect me with opportunities to put my passion into practice.  I interned at EMILY’s List, an organization committed to electing progressive female candidates to Congress, in Washington, D.C.  I realized that hardly anyone was talking about the fact that women make up only 17 percent of Congress.  When I asked about it, many of my friends claimed that they didn’t think feminism was relevant in today’s world.  I was shocked, and as I collected more data and stories through my role as a research assistant at the Women and Public Policy Program at the Kennedy School, I wanted to find avenues to change the conversation.

I found a place to do that at the IOP: the Women’s Initiative in Leadership.  Through the initiative, I heard stories about leadership from women like Harvard President Drew Faust, former Washington Post political editor Maralee Schwartz, and Barbara Kellerman, the James McGregor Burns Lecturer in Public Leadership.  These stories have inspired discussions with my fellow students about our own experiences on campus and the challenges facing women today.

Furthermore, I have started to bring these discussions to the broader Harvard community.  A few weeks ago, I helped put together a screening of “Miss Representation,” a new documentary about women’s misrepresentation in the media and subsequent underrepresentation in positions of power.  This screening, which attracted about 200 students, proved to be the first step, I believe, in changing the conversation about women on campus.  I’ve noticed that students feel more comfortable calling other students out when they make demeaning comments. (The ISawYouHarvard website features comments citing “Miss Representation” as a reason to judge female Undergraduate Council candidates by their platforms rather than by their looks.)

My experiences at Harvard have fueled my desire to strengthen women’s voices and make society more accountable to women.  And so it has dawned on me: Leaving Harvard to work with Women for Obama isn’t exactly what my plan prescribed, but it is a natural next step after my seven semesters.  Harvard has prepared me to leave Harvard, and this is an empowering feeling.  While I have felt the disillusionment that is permeating the country, I feel comfortable being both critical and hopeful at the same time.

I finally realized that the impulsiveness that felt so unsettling at first was just the culmination of a whole lot of preparation.  In the last three and a half years, I have learned that it’s OK to be spontaneous and to take a couple of steps off the expected life path.  On the flip side, I’m able to be spontaneous because I’ve been lucky enough to figure out what excites me by talking to people about my interests and letting myself be inspired by their stories.