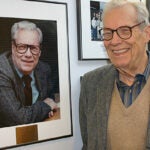 On a rare balmy December night, a superstar swept through Harvard. He was tall and handsome, and came with a legendary musical repertoire that even your parents knew.

One doesn’t immediately associate Lionel Richie with “Harvard.” But the same sentiment applied to the award-winning artist, who remarked that when he learned he’d be visiting the University, he expected to hear the grand, sweeping sounds of Bach.

But Richie heard instead the traditional sounds of Mexico as performed by Mariachi Véritas de Harvard, which ushered the legendary singer into Kirkland House’s Junior Common Room Monday evening for a special question-and-answer session and reception with Harvard College students.

Richie, in town to receive the Harvard Foundation’s inaugural Peter J. Gomes Humanitarian Award, looked dapper and ageless and answered questions about his sprawling career in entertainment with a down-to-earth demeanor.

Originally an economics major at Tuskegee Institute, Richie and his band the Commodores went on tour with the Jackson 5, which halted Richie’s studies. Because he missed classes, his grades fell.

“I went in and met with the dean, who told me I was making more money than him. He said, ‘School is a place to develop a scheme to make money, if you don’t already have a scheme,’ ” said Richie. “But I returned four years later, with a No. 1 record with the Commodores, and I went back to school and finished that last year.”

Alongside the late Michael Jackson, Richie famously co-wrote “We Are the World,” a charity single to help alleviate the famine crisis in Africa that featured dozens of singers, including Bruce Springsteen, Stevie Wonder, Paul Simon, and Bob Dylan. The song was repurposed in 2010 to raise money for victims of the Haitian earthquake.

“I do believe there’s a higher calling for all of us,” Richie said. “When ‘We Are the World’ came along, it was the best opportunity for me to show off all this talent and give some money back to some lives. So in terms of my most valued period, Michael and I with ‘We Are the World’ was just amazing.”

After the Harvard reception, Richie was treated to a dinner with Harvard students and performances by the Kuumba Singers of Harvard College and Harvard College KeyChange. Harvard Foundation Director S. Allen Counter emceed the event and presented Richie with the 2011 Gomes award for his worldwide humanitarian contributions, which include raising more than $3 million for the Breast Cancer Research Foundation after seeing his grandmother suffer from, but ultimately survive, the disease. She lived to be 103.

“I thought, in her name, in her honor, it was necessary to get on board, necessary to be a support unit for this life-altering disease,” said Richie, whose grandmother was a close friend of Gomes, who was the Plummer Professor of Christian Morals and Pusey Minister in the Memorial Church, and who died from a stroke in February.

“He watched me grow up,” Richie revealed.

Richie and his family, who hail from Tuskegee, Ala., first encountered Gomes while he taught for two years at the institute.

“My grandmother and he would get together and talk about things, and I was surrounded by his genius and his humor,” said Richie. “He put a real, everyday face on a subject like religion. He made it real.”

“Rev. Gomes served Harvard for over 40 years … and I cannot begin to tell you all that he did for this University,” said Counter.

Richie, who tossed his planned speech aside, said: “I had no idea about this experience. I didn’t realize at Harvard I’d get a gospel group, a jazz group, a mariachi group, all this talent. … I had a speech designed, but it’s not necessary because you’ve all upstaged me completely.”

“To me, ‘humanitarian’ means only one thing. It means lover of people, all people, for no other reason but for the fact that they’re alive. We find so many times in life that we travel the world criticizing why people are not like we are. And what I’ve learned, if nothing else, is that you live for the fact that we’re different,” he said, adding, “I write about three corny words that will never go out of style: I love you.”