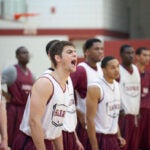 Given their knowledge of everything from dusty old tomes to statistical databases, most Harvard librarians are experts on the past and the present. But on the second floor of 90 Mt. Auburn St., a new team of Harvard University Library leaders is focused squarely on the future.

The Harvard Library’s leadership team, however, has only recently taken shape. Led by Executive Director Helen Shenton and Mary Lee Kennedy, senior associate provost for Harvard Library, the group has an ambitious aim: to take a diverse network of libraries that have grown organically over the course of 375 years and bring them together under a single mission and structure.

“Right now we’re taking leaps forward on the strategic opportunities that we identified in the Library Board meeting in June,” said Kennedy, who in July left her post as executive director of knowledge and library services at Harvard Business School to join the team. “In a community that is as diverse and talented as Harvard, we actually have an opportunity to make everything that’s already quite excellent even better. It’s a great position to be in, but it also has to be a very inclusive process.”

Indeed, one of the team’s challenges is to take input on the library’s existing structure from all levels — from staff librarians to the Library Board, which oversees their work — and build from it a more efficient, forward-thinking library.

With technology rapidly changing scholarship and librarianship, “there is this realism everywhere about the fact that no one can do it all,” said Shenton, who previously worked for the British Library and who became the Harvard Library’s first executive director at the end of last year.

“There’s been an explosion of information. But also, I think there’s more of a philosophy now around collaboration and connecting” — a philosophy Shenton wants to harness and promote at Harvard. “We’re very keen on making innovation part of the library’s culture,” she said.

The Harvard Library transition, which was first proposed in a task force report in 2009 and has been in development for two years, entered a more concrete design phase this past August. Starting in January, the leadership team will help oversee the implementation of a series of recommended changes to the libraries’ organizational structure, a process that should be completed by the end of 2012.

It also will handle functions common to all the libraries through a shared services system, which includes information and technical services, access services, preservation, and digital imaging.

“The Library Board is the decision maker about strategy and policy. They’re looking out for the good of the whole institution,” Kennedy said. “It’s our job as a team to work together and make that happen.”

But that doesn’t mean Harvard’s system of 70-plus libraries will become entirely centralized. Kennedy was quick to say that individual libraries will retain their existing relationships with the Schools and faculties they serve, so that they can stay in touch with the needs of the faculty, students, and researchers that depend on them.

“Harvard is a network, and all the pieces have to work together,” Kennedy said. “We call it ‘shared services’ on purpose. It’s about shared accountability, and making sure the whole is bigger than the parts.

“We’re in a phase of reinventing ourselves — but not without tremendous thought,” Kennedy said. “We’re basing it on the last two years of investigations and recommendations.”

The transition offers the Harvard Library “the gift of time” to focus on big-picture questions, Kennedy said.

“This is new for Harvard,” she continued. “We have not said in the past, ‘We’re all going to work together to figure out what we want to do.’ We’re looking at how to leverage what we hold in common, and also to build on areas where we’re doing very exciting work, like digital preservation, our early steps in coalition building with other institutions, and collection development.

“In some ways we need to be bold.”

Rounding out the leadership team: