Baking in the details 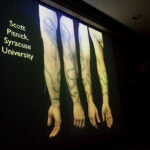 In the basement of Harvard’s Semitic Museum, Alex Douglas looked at the pieces of baked clay in front of him, teasing out how they fit together into a small tablet, thousands of years old and marked with ancient cuneiform writing.

Finding a void in the reassembled tablet without a piece to fit into it, Douglas referred to a computer screen, where a photograph of the intact tablet was displayed.

“I want to make sure that wasn’t me getting the mend wrong,” Douglas said. “When I first took it out, there were a lot of pieces. I wasn’t sure where they all went.”

Douglas, a graduate student in the Department of Near Eastern Languages and Civilizations, is part of a long-running project at the Semitic Museum to conserve its unusual collection of thousands of clay tablet.

The project seems humble enough. A furnace on a table behind Douglas bakes a handful of the small tablets, just inches on a side. That is followed by two baths in de-ionized water, drying, and, for tablets whose internal moisture causes them to break in the process, reassembly.

“They’re our responsibility, essentially forever,” said Adam Aja, the assistant curator at the museum and overseer of the project. “This is the best treatment you can do. They’ll be as stable as any ceramic pot and can be handled.”

Preparing tablets that are already thousands of years old to survive “forever” may warrant such a long-running project. The Semitic Museum has been baking tablets for 10 years and has another five or so to go, Aja said. The tablets themselves are part of an enormous collection of 5,000 clay tablets, some of them purchased, but most excavated in the 1920s and 1930s by a Harvard-led dig in the ancient city of Nuzi, near Kirkuk in present-day Iraq.

The tablets represent a unique record of the area 3,500 years ago, according to Anne Lohnert, a postdoctoral fellow in the Mahindra Humanities Center who works two days a week translating tablets. Rather than a grand telling of history, most of the tablets are records of everyday life, sales receipts, real estate transactions, and adoption records.

“You get a picture out of these hundreds of texts of life in these times,” Lohnert said.

Lohnert said she expected such a detailed accounting to be dull, but instead a rich picture of everyday life has emerged. Real estate transactions, for example, required the buyer to be adopted into the seller’s family. The tablets also highlight details of the government and the tax system, of marriage contracts, of buildings that need repair, and also of the importance of the military. Many tablets detail the armory’s inventory, warriors who died in battle, and even crippled horses.

“It doesn’t have the filter of a king saying, ‘I did this and that.’ Here, it’s the opposite. The king is absent,” Lohnert said.

Lohnert said she has been struck by the prominence of women in the records and of how they could be hard bargainers. She was also struck by the sheer volume of the tablets, unusual for a city of Nuzi’s size.

When they were created, the small, pillow-shaped tablets were left in the sun, which dries the exterior but can leave moisture in their thick middle. Over the years, some tablets were baked further, sometimes in a kiln set up in the field where they were excavated. That means the collection contains tablets in widely varying conditions, some baked, some not, some incompletely baked. Moisture remaining in the tablet can cause it to crack and crumble.

The baking project, designed by conservator Dennis Piechota, who remains an adviser, is intended to cure each tablet thoroughly and uniformly, and then soak it to eliminate any salts that could cause damage later. The kiln temperature is slowly raised to 675 degrees Celsius, held there for several days, and then slowly brought back down to room temperature. The tablets are placed in a fine metal mesh container before going into the furnace, to contain any pieces that may come off during the process and in the subsequent water baths. Any loose pieces are reattached by a cadre of trained students.

“You have to apply some artistry. It’s not a simple task. It requires practice,” Aja said. “It’s about precision, not speed.”

Douglas, in his second year of studying the Semitic language Akkadian, said he isn’t fluent enough to read the tablets casually as he works but could parse them if needed. It’s exciting, he said, to handle the original texts from an ancient era that he’s studying in the classroom.

“It’s fascinating work to do,” Douglas said. “It’s a chance to work with ancient artifacts up close.”