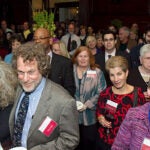 A quarter-century, and still going strong

When Victoria Budson was a college sophomore, her parents asked her what she planned to do with her life.

“I want to lead social movements,” she told them. Slightly baffled, her father — one of several Harvard graduates in the family — responded, “Well, are you going to go to the Business School or the Law School?”

“Back in the ’80s, saying you wanted to have a career in feminism was something of an unknown,” Budson recalled one recent morning from her office in the Taubman Building. Little did Budson or her parents know that her passion for women’s equality would in fact lead her to Harvard Kennedy School (HKS), where she has served as executive director of the Women and Public Policy Program (WAPPP) for the past 15 years.

By helping HKS faculty to craft policies and programs to help bring about gender equality in American politics and abroad, Budson has stayed true to her original cause. She even earned that parent-assuaging Harvard degree: In 2003, she became the first HKS employee to graduate from the School’s midcareer master in public administration program while working full time.

“The work I do here is about closing gaps,” Budson said. “People make laws out of their life experience. If women aren’t represented, the most basic needs of women’s lives won’t be translated into good policy.”

Budson, who grew up in Wellesley Hills, Mass., left home to attend Haverford College but developed back problems that forced her to return to her hometown. During her two-year recovery from spinal fusion surgery, she enrolled at Wellesley College, a change that led her to new thinking.

“I don’t think one can ever understand how to build equality if one has never been someplace where one is put first,” she said of her time at the women’s school. Even the college’s gym was a revelation. “I’d never been in a sports facility before in my life where the women’s locker rooms weren’t an addition.”

After graduating in 1993, Budson embarked on a career in politics. She soon became the first woman chair of the Young Democrats of Massachusetts and was elected to Wellesley’s town meeting.

In 1996, she met Joseph Nye, then the new dean of the Kennedy School, who mentioned that HKS hoped to start a women’s center. “I felt that I knew just what should be done,” she said. Nye agreed, and hired her to be the first executive director of WAPPP.

At the time, the HKS faculty had one woman. When Budson called an introductory meeting with the School’s female students, the group could fit comfortably in a single function room.

“I sat with these women — who were at a school of government, who thought enough of themselves to have applied to a school like Harvard, and who were successful enough to be admitted — and I said, ‘How many of you are interested in running for public office?’” Budson recalled. “I got one hand.”

Convinced the School could do more to help produce elected women leaders, Budson started From Harvard Square to the Oval Office, a program that trains 50 female students each year. The program hosts workshops with top political consultants on everything from media appearances to fundraising strategies, supports summer political internships, and gives its graduates a support network to tap into down the road.

“We help people go from having the idea to run, to having the skills and confidence and actually envisioning themselves as political leaders,” she said.

Outside Harvard, Budson remains active in state politics and women’s issues. This past summer, she was elected chair of the Massachusetts Commission on the Status of Women, after being appointed by Gov. Deval Patrick.  The commission, an independent state agency, works to advance equality for women in all areas of life.

“My work here at Harvard is incredibly important, but [it] won’t feed women who are hungry or shelter women who don’t have homes,” she said, although hopefully it will lead to policies that leave fewer women hungry or homeless in the future. The research and ideas coming out of WAPPP will improve systems over time, but Budson insists that women must get involved now, no matter how imperfect the political process.

“Structural change will take a really long time,” she said. “I can’t wait that long.”