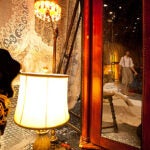 A show fit for royalty

In July, modern dance legend Liz Lerman stepped down as director of the Dance Exchange, a Maryland-based company she founded 35 years ago.

But dance is all about movement, and Lerman came to Harvard this semester as a visiting lecturer in the Music Department and as the Josep Lluis Sert Practitioner in the Arts. “The timing was right,” she said.

For Harvard, the result was wonderful.

Lerman, who is dancer-slim and electric with energy, led workshops on movement for courses in law, mythology, arts education, and more. She initiated a conversation series called “Treadmill Tapes” with Harvard experts in English, government, botany, art history, and other disciplines. (These 45-minute talks, conducted on side-by-side treadmills, are being edited down to a few minutes each.) She taught a course. And in November Lerman staged “Healing Wars,” a work in progress that will be part of a grander national artistic re-imagining of the Civil War during its sesquicentennial years.

In addition, she was just named a United States Arts Fellow.

In “Healing Wars,” dancers, actors, and musicians performed on every floor of the Carpenter Center for the Visual Arts, inside and outside. The audience members roved, following the action. It was theater that “showed off our wonderful Corbusier building in new and exciting ways,” said Rodowick. (The performers included Lerman’s two teaching assistants, Alli Ross, Ed.M. ’10, and Lauren Simpson, Ed.M. ’11, as well as noted actor Bill Pullman his wife, Tamara Hurwitz Pullman, a modern dancer.)

Integrating the arts with other disciplines was at the heart of Lerman’s four-month visit. It was familiar territory. In the past decade, she oversaw a series of collaborations at Wesleyan University designed to embody scientific ideas. (Her dance piece “Ferocious Beauty: Genome,” for instance, opened at Wesleyan in 2006.)

Those interdisciplinary experiments prepared her for this semester, she said, and may signal a future when practicing artists move in and out of Harvard — weaving their skills into multiple curricula.

That’s Lerman’s hope. “In schools where lectures are still the primary form of learning, this is all experiential,” she said of combining text and talking with movement. “We move, we talk, we discuss, we read, we talk, we move.”  That creates “added forms in which you put knowledge,” said Lerman.

Considering any realm of inquiry “in terms of its shape, contour, and movement can be a powerful way of opening up new questions and perspectives,” said Laura Ricci, Ed.M. ’12, who studied with Lerman this semester. “I am amazed at how the dance and movement tools Liz has shared with us have opened up my thinking about my academic work.”

“Choreography can be used to increase knowledge in any academic field, again and again and again,” said another of Lerman’s students, Mariah Steele, a master’s degree candidate at Tufts University’s Fletcher School of Law and Diplomacy. “In particular, I appreciated her emphasis on ways of conducting research other than the typical recourse to written texts. Liz validated that researching oneself through movement or personal stories can reveal as much information as a scholarly article.”

In the class Music 101r: “The Choreography and Design of Partnership and Collaboration,” everyone had to perform a solo after the first four weeks, to demonstrate that rigorous, expressive movement can be integrated with reading and talking and other pathways to learning. Lerman calls the work of putting thoughts into movement “translating.”

“Working with Liz Lerman this semester has been one of my most difficult experiences at Harvard thus far,” said Bex Kwan ’14, who described her as “an artist and teacher who reveals the intellectual rigor of art.”

Dance and movement can bring something to every academic discipline, said Lerman, and eventually to the workplace. Consider these life lessons from the world of art-making:

Praising the resources that Harvard gave her, Lerman also deepened research into her Civil War project, which evokes an irony: that medical practice becomes more advanced during wartime.

“People often think about a special semester like this as a retreat,” said Lerman of her Harvard autumn. “Not me.”