A vote for more natural gas 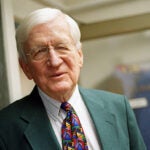 A building block for GPS

The head of one of the world’s largest independent oil and gas exploration and production companies said he is an enthusiastic convert to the promise of natural gas to lower fuel costs, ease U.S. dependence on foreign oil, and reduce the environmental impact of burning fossil fuel.

James Hackett, chairman and chief executive officer of Anadarko Petroleum Corp., said Wednesday that developments regarding shale gas over the past five years amount to a revolution in the nation’s energy picture. Supply estimates have increased dramatically in recent years, and estimates show that there’s enough natural gas to meet moderate demand for a century.

The rapid increase in supply is already driving prices down, and Hackett said projections show natural gas can provide fuel at the equivalent of $42 per barrel of oil at a time when oil is in the neighborhood of $100 per barrel. Coal remains cheaper, he said, but all of the health and environmental costs of burning coal are not reflected in its price. Burning natural gas produces far fewer greenhouse gases than does coal, he said.

Hackett delivered his speech, “North America’s New Age of Energy Abundance: Prudent Oil and Natural Gas Development,” at the Science Center Wednesday evening in a Future of Energy talk, sponsored by the Harvard University Center for the Environment.

The increased supply and lower prices of natural gas have the potential for economic benefits beyond the energy sector, Hackett said. Though thought of primarily as a fuel, natural gas has long been a component in making fertilizers. A reduction in cost, Hackett said, could cut expenses for farmers, potentially lowering food prices.

Already, Hackett said, the increased production of shale gas is creating jobs, in both the petroleum and fertilizer industries. Factories that had been shuttered five years ago are re-opening.

With a potentially dramatic increase in production of natural gas and other unconventional sources of oil such as that derived from oil sands, Hackett said that energy independence — a stated goal of the U.S. for decades — is potentially achievable.

“There is a huge potential to make us almost independent,” Hackett said.

Hackett briefly addressed alternative energy sources such as wind and solar, saying they still have a problem with delivering energy when it’s needed — solar, for example, doesn’t produce when the sun goes down, which is when people turn their lights on — and haven’t come up with a workable energy storage solution to solve the problem.

Though there are already 100,000 vehicles powered by natural gas in the United States, there is room for expansion, Hackett said, though a lack of natural gas refueling stations remains a major hurdle. He suggested usage could expand by converting medium- and heavy-duty trucks and buses to natural gas, which could save 1.2 million barrels of oil a day by 2035.

In fracking, liquids are injected under pressure into shale rock deposits, cracking the rock and releasing gas, which is extracted at the surface. Problems have cropped up in several ways, Hackett said, including improper handling of water as it comes back out of the ground, heavy truck traffic in rural parts of the country that aren’t used to that, and the release of methane into the atmosphere.

Hackett said that a recent report by the National Petroleum Council, requested by Energy Secretary Steven Chu, recommended establishing regional centers of excellence to establish best practices, which can be shared with regulators in order to minimize problems. That same report also recommended a carbon tax, if the government believes it necessary.

Hackett said climate change is an important issue to consider in determining the nation’s future energy mix, and acknowledged that though natural gas releases less carbon dioxide than coal and oil, it does release some carbon dioxide when burned and so isn’t the ultimate solution. Still, he said, climate change concerns shouldn’t overshadow other important priorities, such as clean water, proper land use, and limited community impact.

“This is a real answer for the country,” Hackett said.