A data bank to battle cancer 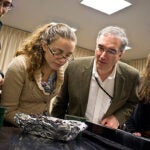 Worming out of listening

Personalized cancer treatment has become a holy grail of researchers, physicians, and patients. By reading the genes of individual tumors, drugs can sometimes be used against specific cells, replacing the shotgun blasts of traditional chemotherapy and radiation with treatments that are more targeted with fewer side effects.

In the past several years, researchers have taken steps toward that goal, identifying specific mutations in breast, skin, blood, and other cancers and developing treatments targeting those specific cell types. Those treatments remain limited, however, leaving the majority of cancer patients still facing lengthy, draining chemotherapy and radiation regimens.

Researchers at Brigham and Women’s Hospital and the Dana-Farber Cancer Institute are seeking to improve that. The Harvard-affiliated hospitals are collaborating on a massive, long-term effort to collect and analyze tumor tissue from 10,000 cancer patients each year. Using automated gene-analysis technology, they’ll scan each tumor for nearly 500 known mutations on 41 genes.

Barrett Rollins, Dana-Farber’s chief scientific officer and Linde Family Professor of Medicine at Harvard Medical School (HMS), said the project straddles the research and clinical worlds. It will enable researchers to understand better how different tumors behave, and it will provide an opportunity to test new therapies, even as it provides information to physicians.

Though the program is just getting off the ground, Janina Longtine, associate professor of pathology at HMS, director of molecular diagnostics at the Brigham, and head of the lab conducting the analysis, said that researchers already have issued about 100 reports on tumor types that might be useful to physicians in designing cancer patients’ care.

Though the study, called Profile, will initially examine tumor genes for known mutations, it also will allow more rapid testing of new treatments by providing a database of patients, their cancers’ genetic profiles, and records of what treatments have worked or not over time. If a drug company comes up with a new treatment for breast cancer, for example, rather than spending a year recruiting patients, the database could include a group of patients whose disease has failed first-line treatment, and who might be good candidates for the drug trial. Just by speeding up the process of performing clinical trials, the system aims to cut the time to market for promising treatments, Rollins said.

As genetic-sequencing technology advances and becomes cheaper, researchers hope to switch from examining tumors for known mutations to scanning tumors’ entire genetic codes, which would allow researchers to look for new mutations and currently unknown weaknesses that could be targeted by future treatments.

The Profile study, one of the largest of its kind in the nation, is part of a shifting cancer landscape. Not long ago, cancers were known mainly by the type of tissue in which they originated. As medical understanding of cancer biology and genetics advanced, scientists understood that cancer cells were driven not just by the tissues from which they arose, but by the mutations that, for example, caused skin cells to transform into melanoma.

What had long been thought to be one type of cancer may turn out to have five, 10, or 20 subtypes, Rollins said. In addition, cancers arising in different organs have been shown to have mutations in the same genes, and may respond to similar treatments. A mutation in the B-Raf gene, which creates a protein involved in cell growth, has been found in 10 or 12 cancers.

While this newfound understanding greatly complicates the view of cancer, it also provides multiple avenues through which to attack the disease.

Rollins said this project is by far the most complicated he has worked on and involves 40 people. In addition to the scientific aspects, there were administrative tasks related to coordinating two major institutions (which will be joined by a third, Harvard-affiliated Children’s Hospital, in the coming months). The goal is to enroll as many cancer patients at the participating hospitals as possible, something that required study intake procedures to be incorporated into normal hospital intake procedures, while still protecting confidentiality.

“There’s data in all those patients,” Rollins said. “What we wanted to do … is turn a population of 16,000 patients into a cohort we could study.”