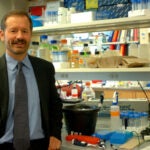 Study finds an increase in energy from meat, suggesting key role in evolution

Next time you’re out to dinner, you may want to think twice before ordering your steak rare.

In a first-of-its-kind study, Harvard researchers have shown that cooked meat provides more energy than raw meat, a finding that challenges the current food labeling system and suggests humans are evolutionarily adapted to take advantage of the benefits of cooking.

Led by Rachel Carmody, a Ph.D. candidate in the Department of Human Evolutionary Biology at Harvard’s Graduate School of Arts and Sciences, and published online ahead of print this week in the Proceedings of the National Academy of Sciences (PNAS Early Edition), the research bridges the fields of human evolution and modern human nutrition.

“Every day, humans in every global society devote time and energy to processing food — cooking it, grinding it, slicing it, pounding it — yet we don’t understand what effect these efforts have on the energy we extract from food, or the role they might have played in our evolution,” Carmody said. “It is astonishing, since energy gain is the primary reason we eat.”

Though earlier studies had examined how cooking affects specific aspects of the digestive process, surprisingly, Carmody said, none had examined whether cooking affected the overall energy value of meat. In addition, no study had compared the energetic effects of cooking with those of non-thermal processing methods like pounding, whether for meat or starch-rich foods.

“There had been no research that looked at the net effects — we had pieces that we could not integrate,” Carmody said. “We knew some of the mechanisms, but we didn’t know how they combined.”

To examine those effects, researchers designed a unique experiment. Over 40 days, they fed two groups of mice a series of diets that consisted of either meat or sweet potatoes prepared in four ways — raw and whole, raw and pounded, cooked and whole, and cooked and pounded.

Over the course of each diet, the researchers tracked changes in the body mass of the mice, controlling for how much they ate and ran on an exercise wheel. The results, Carmody said, clearly showed that cooked meat delivered more energy to the mice than raw meat. The same was true for sweet potatoes. In both foods, the energetic gains from cooking were greater than those from pounding, and cooking increased the energy gained from pre-pounded foods. Preference tests also revealed that hungry mice strongly preferred cooked foods, suggesting that the energetic benefits of a cooked diet were obvious to the subjects themselves.

It’s a finding, Carmody said, that holds exciting implications for our understanding of human evolution.

Though ancestral humans were eating meat as least 2.5 million years ago, without the ability to control fire, any meat in their diet was raw, though possibly pounded using primitive stone tools. Approximately 1.9 million years ago, however, a dramatic change began to occur. The bodies of early humans grew larger. Their brains increased in size and complexity. Adaptations for long-distance running appeared.

Earlier theories suggested these energetically costly changes were made possible by increased quantities of meat in the diet. However the results of the new research support another, albeit complementary, hypothesis — that cooking allowed humans to extract more energy from the foods they were already eating, both meat and widely available starch-rich tubers.

Richard Wrangham, the Ruth Moore Professor of Biological Anthropology and master of Currier House, proposed that idea years ago, but the new study provides the first hard evidence to support it.

“I’m a biologist by training,” Wrangham said. “If you want to understand the anatomical, physiological and behavioral features of a species, its diet is the first thing you ask about. If you want to know what makes a giraffe tick, it’s the fact that it eats leaves from the tops of trees. If you want to understand the shape of a flea, it’s because it eats blood. But with humans, our adaptations have in general been seen as being the result of our ability to use our brains. Because that approach focuses on problem-solving it strays from the fundamental biological concept of species being adapted to a particular type of diet, and lures us into thinking that we have no particular kind of dietary adaptation.

“That’s why Rachel’s work is so important,” he continued. “For the first time, we have a clear answer to why cooking is so important cross-culturally and biologically — because it gives us increased energy. Life is all about energy.”

However, the impacts of the study, which Carmody co-authored with Wrangham and Gil Weintraub, then a Harvard undergraduate and now a medical student at UCLA, aren’t limited to the early days of human evolution. The findings also lay bare some shortcomings in the Atwater system, the calorie-measurement tool used to produce modern food labels.

“The system is based on principles that don’t reflect actual energy availability,” Carmody said. “First, the human gastrointestinal tract includes a whole host of bacteria, and those bacteria metabolize some of our food for their own benefit. Atwater doesn’t discriminate between food that is digested by the human versus the bacteria. Second, it doesn’t account for the energy spent digesting food, which can be substantial. In both cases, processing increases the energy accrued to the human. Such evidence suggests that food labels do not properly account for the effects of food processing.”

In this way, the new research could help inform how food scientists tackle two of the thorniest of dietary challenges — the prevalence of obesity in Western nations, and malnutrition in developing parts of the world.

“As human evolutionary biologists, we think about energetic gain as being something positive — it allows for growth, maintenance and reproduction, and it is therefore a critical component of a species’ evolutionary fitness,” Carmody said. “But the question in the modern world is: If we now have the problem of excess as opposed to deficit, is that still a positive?

“This work illuminates that the tools we currently use to understand caloric intake, both in cases of malnutrition and cases of obesity, are suboptimal. They’ve been based on the assumption that the human body is a perfectly efficient digestion machine, when, in fact, it’s not — but we now see that its efficiency is affected by food processing, particularly cooking.”

The research was supported by the National Science Foundation, the Harvard Department of Human Evolutionary Biology, the Harvard Museum of Comparative Zoology, and the Stellenbosch Institute of Advanced Study.