New views of the cosmos 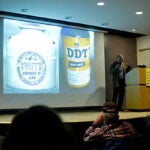 Woods, yes, but as before, no

Harvard astronomers among first to use most powerful telescope ever built

Though it won’t be completed until 2013, the Atacama Large Millimeter/submillimeter Array (ALMA), a radio telescope observatory under construction in northern Chile, is already the most powerful and complex such facility ever built, and four astronomers from the Harvard-Smithsonian Center for Astrophysics (CfA) are among the first in line to use it.

David Wilner and Sean M. Andrews, both lecturers on astronomy, and Harvard College Observatory associates Chunhua Qi and Arielle Moullet were selected from nearly 1,000 researchers worldwide who were competing to use the observatory. Their plans for their time on the telescope range from searching the dust cloud surrounding nearby stars for hints at how planets are formed, to conducting the most in-depth analysis yet of the volcanic activity on Jupiter’s innermost moon.

“It’s very exciting,” Wilner said of being among the first to use ALMA. “I really can’t express how fortunate I feel to be able to use this kind of facility. All we are doing is pursuing knowledge, and it’s a privilege to be able to do that. It’s amazing.”

When completed, ALMA will easily be the largest observatory of its kind on the globe. Current plans call for the installation of 66 antennas — 54 with 12-meter diameter dishes and 12 smaller, 7-meter dishes — which can be arranged up to 10 miles apart. For the first round of research, however, astronomers will only use 16 of the array’s antennas. Despite being less than a quarter of ALMA’s planned size, the facility will still be the most powerful radio observatory.

Wilner, Andrews, and Qi plan to use the observatory to examine clouds of gas and dust that surround nearby stars.

Wilner’s work will focus on a narrow portion of the dust belt that surrounds AU Microscopii, a star 33 light-years away, and how the dust is replenished. Studies suggest the dust is the product of collisions between larger bodies — some possibly as large as planets — that are too dim to be seen with other instruments. By studying the dust, Wilner hopes to uncover evidence of those larger bodies.

“The theory is that there are larger bodies that we can’t see, which range up to even the size of planets, and as they collide they produce dust,” Wilner said. “So we can use the dust we can see as a tracer of those larger bodies.”

Andrews is hoping to spot the telltale signs of how planets are formed by comparing images of the gas and dust around a pair of stars called V4046 Sgr. Current theory of planetary formation posits that, as dust grains orbit a star, they collide and begin to stick together, growing into larger bodies. Those larger bodies then drift inward, closer to the stars they orbit. The expectation is that observations made at ALMA will show that the dust disk is more compact than previously believed, suggesting that larger particles are concentrated closer to the stars.

“It is extremely exciting to use a revolutionary instrument like ALMA at this first opportunity for science observations,” Andrews said. “I have very high expectations that in the coming years ALMA will fundamentally advance our study of the disks around young stars and their many complex roles in the process of planet formation.”

Qi’s work with ALMA will focus on the gas in the proto-planetary disk surrounding the star TW Hydrae, particularly the molecular gas near the disk mid-plane, where the bulk of the disk mass is located. Studying the gas in the mid-plane of such disks is complicated by the fact that most telescopes are limited by lacking probes to this extreme low temperature and high density area.

By taking advantage of ALMA’s unprecedented power and sensitivity to search for signs of specific hydrogen isotopes, Qi hopes to shed new light on the gas kinematics and ionization in the mid-plane of the disks.

“No other telescopes can achieve comparable sensitivity and resolution,” he said. “I can’t imagine how many hidden secrets can be revealed once ALMA unfolds its full, enormous observational potential. I am thrilled to be among the first to use the ALMA Observatory.”

Of the four projects, only Moullet’s is not focused on the gas and dust surrounding stars. Instead, her project would train ALMA’s antennas on Io, the innermost moon of Jupiter, to  better understand aspects of its atmosphere.

While astronomers know Io’s thin atmosphere is largely composed of sulfur dioxide, Moullet hopes to identify where and how the atmospheric sulfur monoxide and sulfur dioxide are replenished, and whether other gases, such as silicon monoxide, carbon monoxide or even gaseous table salt, are present in the atmosphere. Identifying those other gases, she said, is particularly important as a way to characterize the volcanic activity on Io as being silicate- or sulfur-based. Other observations will make the most accurate measurement to date of the wind speeds in the moon’s thin atmosphere.

Wilner predicted that the level of excitement — and the pace of discovery — will only increase as ALMA comes closer to its ultimate site.

“It’s taken a long time for ALMA to reach this point,” Wilner said. “It’s a scale that we’re not used to in radio astronomy. … Its power is one or two orders of magnitude greater than what exists today.”