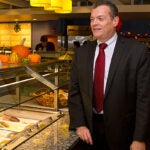 In a hidden basement room in the Littauer Building, M.P.A. student Ashley Orynich was preparing for her close-up. Armed with talking points and a dazzling smile (she’s also a newly minted dentist), she took a seat in front of a large camera, ready to win over the imaginary Bill O’Reilly or Rachel Maddow on the other side of the lens.

The leaders of that day’s “On-Camera Interview Basics” workshop, Molly Lanzarotta, senior communications officer at Harvard Kennedy School (HKS), and Doug Gavel, HKS associate director of media relations and public affairs, warned her that the questions — which Lanzarotta would read from the other side of a soundproof door — wouldn’t be easy.

The lights dimmed, and Lanzarotta dusted Orynich’s face with powder.

“Visualize that the little orange light is your friend,” Lanzarotta advised.

In a world where every candidate, nonprofit director, or government official is never more than a blog post or a YouTube video away from capturing an audience (or from a potentially ruinous flub), HKS students have learned they need to embrace the spotlight. And to gain the skills they need to communicate effectively, they’ll need more than just the comfort of a friendly blinking light.

Enter the HKS Communications Program, a long-standing resource that offers elective courses, one-on-one writing consultations, and workshops like the one Orynich used to practice interviewing.

HKS recently surveyed its graduates five years out of the School, asking alumni what they found most valuable about their education. The survey found that the tools alumni say they use most often in the real world were their communication skills.

The finding was surprising, given the fact that communications classes aren’t mandatory for any of the School’s degree programs. But the results speak to the popularity and utility of the program, which existed for more than 20 years under the guidance of Marie Danziger, a lecturer on public policy who taught the beloved “Arts of Communication” course. When Danziger decided to retire last year, the Joan Shorenstein Center on the Press, Politics and Public Policy took over the program.

The move to a permanent home is just one of several ways HKS is beefing up the program, said Jeffrey Seglin, the new director. The program also hired another full-time lecturer, Luciana Herman, who joins the ranks of several adjuncts and two writing consultants.

“While the students who come to the Kennedy School are amazingly diverse and talented, many of them have never had strong writing programs or a lot of experience writing or speaking professionally or even dealing with digital media or technology,” Seglin said. “They have expertise in their field, but not necessarily in writing or public speaking.”

That dictum seems to hold true across many professional schools, if HKS enrollment is any indication. Students from the Graduate School of Design, Harvard Business School, Harvard School of Public Health, and elsewhere regularly cross-register for HKS communications classes, according to Seglin.

“Regardless of where you are in your career, it’s never a bad idea to work on these skills,” he said. “The print world may be shrinking a bit, but [students] see the online world expanding. It’s an opportunity for them to get their voices out there, and they’re in the prime market for doing it.”

While there aren’t hard numbers on how many students take advantage of the offerings, Seglin said the communications program offers 60 to 70 workshops per academic year and six or seven elective courses per semester. The classes routinely fill, with a long wait list.

Workshops are first come, first served. One recent evening, Holly Weeks’ workshop on “Giving Bad News Well” drew a curious crowd that overflowed from a small classroom in the Littauer Building. The premise was irresistible, for masochists at least: a chance to practice speaking before an audience that hates your guts.

“This is a safe environment,” Weeks, an adjunct lecturer in public policy at HKS, told her students. “I hope you’ll rise to the occasion and give people a really nightmarish experience.”

Federico Cuadra Del Carmen, an M.P.A. student pursuing a joint law degree at Northwestern University, went into Weeks’ workshop with a solid public speaking background. He had competed in Model United Nations in high school and college, then did communications and marketing for a grassroots nonprofit in Nicaragua.

But when he got up in front of the group — in the guise of a candidate running against Nicaraguan President Daniel Ortega — the crowd’s convincing heckling quickly threw him off course. Weeks stopped him midsentence.

“You’re following us, and we’re not going in a direction you want to be going in,” she told him. Refine your key points and stick to them, she advised.

“Straight repetition is not necessarily a bad thing as long as you’re saying what you need to say,” Weeks said.

With just a few tweaks to his language — lots of “your” and “our”; no “but” statements; simple, forceful sentences that “start, go forward, and end” — Del Carmen quickly regained control of the crowd, making compelling points about Nicaragua’s failing schools and the need for more jobs.

“Classes like these, for people who have some kind of background in politics, may be undervalued or overlooked,” Del Carmen said afterward. “But what these classes offer are strategies for how to improve or polish the skills you already have.”

The workshop made him even more eager to take “Arts of Communication” in the spring —  if he makes the cut, that is. “I couldn’t get in this semester,” he said.