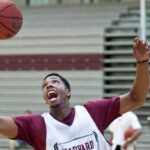 With the help of her faculty mentor, Debra Chang ’12 discovered during the summer that good research sometimes requires a little dancing.

Chang, a sociology concentrator, participated in the new Behavioral Laboratory in the Social Sciences (BLISS) program for the chance to work on a research project with a member of Harvard’s Faculty of Arts and Sciences (FAS). She was paired with Nicole Newendorp, a lecturer and assistant director of undergraduate studies in the Department of Social Studies, on a study of elderly immigrants in Boston’s Chinatown neighborhood. Newendorp sent Chang — who speaks Mandarin — out to collect data from a number of social groups, including one for retirees who enjoyed ballroom dancing. She soon found that the best way to get the seniors to agree to interviews was to join them on the dance floor.

“I always wanted to learn ballroom dancing at Harvard, but because I was doing this research, I decided to sign up for a summer class,” Chang said. “I went back to Chinatown every week and danced with the people there to get to know them. Then I would ask if they would like to be interviewed. I got to ballroom dance with all the people that ended up speaking to me for the study.”

Chang and nearly 150 other Harvard undergraduates spent 10 weeks last summer learning the nuts and bolts of academic research — from ethnography to techniques for culturing living tissue — from faculty in three immersive programs: BLISS, the Program for Research in Science and Engineering (PRISE), and the Program for Research in Markets and Organizations (PRIMO). Harvard College Dean Evelynn M. Hammonds says that the programs give students the same type of close interaction with faculty in the lab and library that freshman seminars provide in the classroom.

“Like the freshman seminars, the summer research programs allow undergraduates to have formative experiences working with faculty,” Hammonds said. “Because there are no term time responsibilities, students can focus on the research enterprise itself and collaborate with some of Harvard’s leading scholars. In so doing, they learn about the sciences and social sciences and also get a view of Harvard that is different from the one they get in the classroom.”

The growing emphasis on an intensive faculty research experience for undergraduates began with PRISE in 2006. The program was created in response to the 2005 report of the Task Force on Women in Science and Engineering, which recommended the development of a summer residential community for undergraduate scholars in the sciences. Any undergraduate in good standing may apply to PRISE, and admitted fellows receive room and board on campus, as well as a small stipend. Faculty and investigators from FAS, Harvard Medical School, and other allied research enterprises across Cambridge and Boston work with students in astronomy, physics, chemistry, biology, computer science, and many other fields.

Greg Llacer, director of the Office for Undergraduate Research Initiatives and of PRISE, said the goal of the program is to expand students’ academic interests by placing them in a “lively and energetic community of scientists.”

“PRISE gives undergraduates the opportunity to work closely with faculty and peers and to focus on research, which is very conducive to having a positive experience in the sciences,” he said. “It allows students to pause and to think about what they may want to pursue. As a result, we now have PRISE fellows who have gone on to graduate school who may have not taken that road if they had not worked with faculty in research.”

Alice Li ’14 spent last summer working with Professor Lee Rubin, director of translational medicine for the Harvard Stem Cell Institute, on ways to improve stem-cell therapies for older patients. She said the most valuable research skill she developed during PRISE was the ability to ask better questions.

“I learned to ask questions the way that a good scientist would,” she said. “Poking my head around my postdoc’s desk to ask why a particular molecule would be our best choice for positive control was just as much a learning experience as, for instance, my practice with tissue culture techniques. I also got to see how Professor Rubin posed questions. He made me feel both challenged and inspired at the same time. I wanted to continue research long after the summer had ended.”

Students have responded enthusiastically to PRISE — which included more than 120 undergraduates in 2011 — and expressed high levels of satisfaction with the program on surveys. In light of this success, the College last year launched BLISS and PRIMO to offer immersive research experiences with faculty in the social sciences and at Harvard Business School (HBS). Participants in the new programs dine at Dudley House with their cohorts in PRISE, and join them for the popular faculty lecture series, open to all summer research students. But whereas PRISE fellows leverage faculty expertise and support for their own research, BLISS and PRIMO participants are matched with faculty on existing projects.

Newendorp, Chang’s BLISS faculty mentor, said she accompanied her student into Chinatown each day, teaching her the techniques of ethnographic research, and helping her to get acquainted with the community. In return, Chang gathered data from immigrants who spoke Mandarin Chinese that complemented Newendorp’s data collection from those who spoke Cantonese.

“In general, the seniors we met liked Debra, who reminded them of their own grandchildren” Newendorp said. “One time, however, a woman criticized Debra’s Chinese, saying that it wasn’t fluent enough. Debra turned that criticism into a learning moment by sticking with the conversation and finding out in the process that this woman was very upset that one of her sons couldn’t speak Chinese. Another time, a man involved in the ballroom dancing group found it easier to talk about his migration experience with Debra, as someone of Chinese descent, than with me, the Harvard professor and outsider.”

The opportunity to work with bright young students such as Chang was one of the reasons that HBS partnered with the College to launch PRIMO, according to Mihir Desai, Mizuho Financial Group Professor of Finance and senior associate dean for planning and University affairs at HBS.

“We created PRIMO to give students exposure to academic life in business schools,” Desai said. “More selfishly, our faculty has benefited from interacting with a remarkable pool of talent in the undergraduate population, and we hope we have addressed our longer-run problem — the scarcity of talent from which we can draw the next generation of business academics. So far, PRIMO has far exceeded our expectations.”

Stephanie Havens ’14 said she didn’t know what to expect when she applied to PRIMO last spring. Then the economics concentrator met with HBS Assistant Professor Eugene Soltes, who told her about his ongoing project on business ethics. She was hooked. Havens partnered with Soltes and did intensive background research for the project, which centered on the former CEO of a major U.S. corporation. She said that her most memorable experience of the summer came when she accompanied Soltes on a trip to meet and interview the CEO — in prison.

“There were barbed wire and motion detectors,” Havens remembered. “It was kind of surreal. A lot of times, research feels a little remote. You’re looking at this information, and it doesn’t have really strong context. It feels far off. Meeting with this CEO in prison brought the work into the real world and gave meaning to what we were doing.”

Soltes — who graduated from Harvard College himself in 2004 — said that Havens’ work over the summer was so strong that he asked her to continue her involvement with the project during the academic year.

“Stephanie spent a lot of time getting an understanding of our subject’s experience at the firm,” he said. “She also spent a lot of time in the Business School and Law School libraries. It’s because of the fantastic job that she did that I’ve asked her to continue her efforts on the project this fall.”

Although BLISS and PRIMO will stay small — between 12 and 18 students each — during the second year of their pilot phase in 2012, College officials say they hope eventually to put the programs on equal footing with PRISE and establish all three as an ongoing summer research village.

“The success of PRISE, BLISS, and PRIMO demonstrates the value of developing a community of researchers from a wide range of academic disciplines,” said Hammonds. “The fact that many students carry on with their work during term time, and even into graduate school, is an indication of the programs’ impact. Our hope is that, one day, every Harvard College student who wants to explore research will have the opportunity to participate in an intensive summer program.”