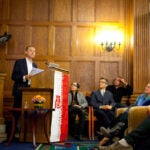 Engages in a ‘heart-to-heart conversation’

By Thomas Lee Office for the Arts Communications

Not even a very unseasonable nor’easter could keep almost 800 classical piano devotees from packing Sanders Theatre on the afternoon of Oct. 29.

The reason? Superstar Lang Lang was in the house — not to perform (that would happen the day after, at Boston’s Symphony Hall), but to teach. Or, as he put it soon after he hit the stage, to “engage in a heart-to-heart conversation through music.”

Hailed by The New York Times as “the hottest artist on the classical music planet,” the 29-year-old presided over a master class featuring three Harvard undergraduate players. His bespoke, metallic-blue suit may have shouted “rock star,” but his coaching and encouragement of his pupils demonstrated a serious passion for the great works in the piano canon.

The master class — sponsored by Harvard’s Office for the Arts’ Learning From Performers program and Celebrity Series of Boston — featured Tania Rivers-Moore ’15, George Fu ’13, and Allen Yueh ’13 performing works by Beethoven, Prokofiev, and Liszt, respectively. Each performance elicited a range of responses from the teacher.

Throughout, his teaching was punctuated with extravagant gestures, sudden leaps to the keyboard to demonstrate passages, and, above all, a keen sense of humor. When Fu informed him that he is concentrating in economics, Lang Lang, clearly stunned by his performance, asked incredulously, “How did that happen?”

By the time of the event’s question-and-answer period, it was obvious that this extraordinary performer had won over his audience anew — and, perhaps, had shown them a different facet of his personality. When asked what his experience has taught him about the meaning of life, he replied, “For me, making music is a real joy, and it’s also a responsibility. We must share our love of music with young people.”

Thomas Lee, director of programs and communications, Learning From Performers, Office for the Arts at Harvard