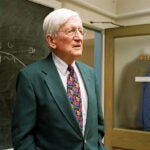 Harvard History Professor Maya Jasanoff has won a Recognition of Excellence Award as part of the 2011 Cundill Prize in History at McGill University for her book, “Liberty’s Exiles:  American Loyalists in the Revolutionary World.” The prize recognizes history books that have a profound literary, social, and academic impact.

“‘Liberty’s Exiles’ tells the story of loyalists who fled the U.S. after the American Revolution and settled all over the British Empire, especially in Canada,” Jasanoff said. “It argues for the importance of taking history out of patriotic, national boxes and seeing it from many sides, so it’s wonderful to be recognized by an international history prize that’s also dedicated to crossing borders, and especially appropriate, given my subject, to receive this recognition from a Canadian university, at a ceremony in London.

“I’m thrilled to see these ‘losers’, whose stories have so often been neglected in the past, receive some attention now. It suggests that there are readers out there who appreciate more nuanced, multisided histories. And it’s a great vote of confidence in the kind of global history I and so many of my colleagues, at and beyond Harvard, are trying to write.”

Jasanoff’s book begins at the end of the American Revolution, when some 60,000 British loyalists — one in 40 members of the population — left their homes to seek refuge elsewhere in the British Empire. As they dispersed — some to as far as Sierra Leone or India, they carried items from their former homes that would leave an enduring American influence on the wider British world.

Jasanoff’s work tells the story of this remarkable global diaspora. Through painstaking archival research and vivid storytelling, the book re-creates the journeys of ordinary individuals whose lives were overturned by extraordinary events. Ambitious, original, and personality-filled, the book is an intimate narrative history and a provocative new analysis that explores a little-known dimension of America’s founding to illuminate the meanings of liberty itself.

A former history and literature concentrator and Adams House resident, Jasanoff graduated from Harvard in 1996, and continued her studies at Cambridge and Yale. Her first book, “Edge of Empire: Lives, Culture, and Conquest in the East, 1750–1850,” was awarded the 2005 Duff Cooper Prize and was a book-of-the-year selection in numerous publications including The Economist, The Guardian, and The Sunday Times (London). She has recently been a fellow of the New York Public Library, the Library of Congress, and the American Council of Learned Societies, and has contributed essays to the London Review of Books, The New York Times Magazine, and The New York Review of Books.

Created by the Cundill Foundation and given annually to recognize and promote literary and academic achievement in history, the Cundill Prize includes a grand award of $75,000 and two Recognition of Excellence Prizes of $10,000 each.

The grand prize was awarded to “Padre Pio: Miracles and Politics in a Secular Age,” written by Sergio Luzzatto and translated by Frederika Randall. The second Recognition of Excellence Award went to Timothy Snyder, author of “Bloodlands: Europe Between Hitler and Stalin.”