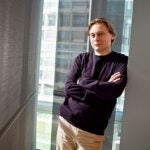 Cancer clues from another species

A major international study has identified a novel gene mutation that appears to increase the risk of both inherited and sporadic cases of malignant melanoma, the most deadly form of skin cancer. The identified mutation occurs in the gene encoding MITF, a transcription factor that induces the production of several important proteins in melanocytes, the cells in which melanoma originates.  While previous research has suggested that MITF may act as a melanoma oncogene, the current study identifies a mechanism by which MITF mutation could increase melanoma risk.

The report from researchers from the United States, Great Britain, and Australia is receiving advance online publication in Nature.  It is expected to appear in a print issue along with a study from French researchers finding that the same mutation increased the risk for the most common form of kidney cancer, for melanoma, or for both tumors.

“We previously knew that MITF is a master regulator for production of the pigment melanin, and several years ago we identified a chemical modification, called sumoylation, that represses MITF activity,” says David Fisher, chief of dermatology at Harvard-affiliated Massachusetts General Hospital (MGH), director of the MGH Cutaneous Biology Research Center, and co-senior author of the Nature paper.  “The currently discovered mutation appears to block sumoylation of MITF, and the resulting overactivity of MITF significantly increases melanoma risk.”

Fisher adds, “We now need to better understand exactly how this mutation causes melanocytes to  become cancerous.  That information might help us discover other oncogenes as well as find treatment strategies to block the cancer-promoting activity and kill melanoma cells.”  Fisher is the Wigglesworth Professor of Dermatology at Harvard Medical School (HMS).

While about 10 percent of patients with melanoma report a family history of the disease, true hereditary melanoma, involving multiple cases across many generations, probably accounts for 1 percent or less of all cases, says co-senior author Hensin Tsao of MGH Dermatology and the Wellman Center for Photomedicine. “Most cutaneous melanomas arise as a result of interaction between environmental factors such as excessive sun exposure and more common, inherited low- to moderate-risk gene variants — such as in the red-hair gene MC1R and this novel variant in MITF.”

The investigators began the current study by sequencing the genome of a melanoma patient from a family in which eight cases of melanoma had been reported across three generations — or in first-degree relatives of the patient — but with neither of the two identified high-risk mutations. Among several novel variants they found, the investigators focused on a mutation in MITF, because it had previously been identified as a potential melanoma oncogene.  Genetic material was available from six additional affected members of this family, and the same MITF mutation — designated E318K — was found in two of them.

To further analyze the role of this mutation in melanoma risk, the researchers genotyped samples from several large studies conducted in the U.K. and Australia involving more than 15,000 individuals. The E318K mutation occurred more frequently in individuals with melanoma than in healthy controls, and was even more common among families with two or three cases of melanoma. Analysis of the mutation’s effects on MITF function confirmed that it reduces sumoylation and increases the transcription of some but not all genes controlled by MITF.  The E318K mutation was also associated with increased numbers of the common skin moles called nevi, a recognized risk factor for melanoma, and with a reduced likelihood of blue eye color.

“This MITF variant doubles the background risk for melanoma, which is approximately the same risk increase conferred by severe sunburns; however, an important aspect of this study is the elegant demonstration of how the E318K change affects MITF function,” says Tsao, who is an associate professor of dermatology at HMS.  “Furthermore, documenting this moderate level of risk required thousands of cases and controls worldwide, a testament to the unique collaborative nature of this study and the potential utility of next-generation sequencing for gene discovery.”