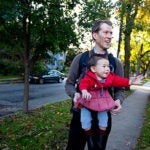 All in the Harvard family

The news of Ihor Ševčenko’s death, on the day after Christmas 2009, elicited a spontaneous international reaction that befitted his stature as a towering intellect and hugely admired scholar in the fields of Byzantine and pre-modern Slavic studies.  Within a few weeks of his passing, the family website had received messages of condolence and recollections from more than eighty colleagues, former students, and research assistants, written in seven different languages.  These remembrances paint a picture of a figure larger than life in every sense, standing over six feet tall and commanding huge vistas of learning; an inspiring teacher dedicated to excellence; and a man of infinite curiosity, profound humanity, deep generosity, boundless wit, and tremendous charm.  He could also be intimidating—a colleague once felt compelled to tell him to his face that he was suffering from a superiority complex.  True to character, he took the remark in good part.  His sense of humor and irony never did fail him.  Ten days before his death he sent a message to a journal editor who had asked him to evaluate a work on religious healing in Byzantium.  The note simply said, “Regrets that I won’t be able to review it, because I myself am about to die.” He was a shrewd player in the game of life; he didn’t need to be told when time was up.

Ihor Ševčenko, Dumbarton Oaks Professor Emeritus of Byzantine History and Literature, was born to Ukrainian parents on February 10, 1922, in a village in east-central Poland not far from Warsaw.  In the Polish capital the young Ihor attended a lyceum where he acquired a classical education and also began the study of a string of Slavic and Western languages that would eventually reach a remarkable number.  He was still a teenager when he translated a short work of Voltaire into Polish for his school’s journal.  Later, at university, he published a Ukrainian version of Orwell’s Animal Farm, and even persuaded the English author to contribute an account of his personal history and of the background to the novel.

Ihor’s early university studies were at the Deutsche Karlsuniversität in Prague where he mastered Czech and German, and in 1945 acquired his first doctorate in the subject areas of Classical Philology, Ancient History, and Comparative Linguistics.  A second doctorate followed some four years later from the Université Catholique de Louvain.  More important than the degree, perhaps, Belgium accorded him the opportunity to become a member of the seminar in Byzantine History in Brussels presided over by Henri Grégoire, the prodigiously productive and charismatic leader of Byzantine studies in that country.  The encounter was to have a lasting impact on Ševčenko the scholar, and years later he remarked that Grégoire’s seminars remained among the most exciting of his intellectual experiences.

Ihor arrived in America in 1949 aboard one of those “Liberty” ships that usually carried a cargo of grain and twelve passengers, and he was soon installed as a fellow at Dumbarton Oaks in Washington, D.C., where he rubbed shoulders with some eminent Byzantinists, including Francis Dvornik, Alexander Vasiliev, and André Grabar.  It was there too, as he boldly recalled in an interview, that he made his first pun in English.  “My first pun was ‘I scream for ice cream.’  I thought it was such a wonderful invention!”  From Washington and pure research he moved to teaching positions at the University of California, Berkeley, the University of Michigan, Columbia University and, finally, following an eight -year stint at Dumbarton Oaks, at Harvard University, where he held the Dumbarton Oaks professorship from 1973 until his retirement in 1992.

His primary appointment was in the Department of the Classics, where he set up a Ph.D. program in Byzantine Greek and a course of study that reflected his firm belief in a comprehensive understanding of Byzantine culture and history.  Candidates for the degree were expected, in their course work and preparation for qualifying exams, to inform themselves about the Hellenistic and Roman background of medieval Greek civilization, to master the language and literature in all levels of style, to be familiar with the ancient literary models from Homer to Plutarch, and to explore in depth an individual author to the extent of knowing both the historical context and the manuscript tradition of that author.  It was a demanding program that attracted a select few students, each of whom went on to produce distinguished research work.  He was also a founding member of the Ukrainian Research Institute, of which he was associate director for more than fifteen years, and a co-editor of Harvard Ukrainian Studies.

The range of Ševčenko’s scholarship was amazing, from nuts-and-bolts philology based on minute examination of original documents to large sweeping essays on big topics, such as the literary genre of saints’ lives.  His writing style was consistently elegant and imaginative.  In a famous article of 1969, “Two Varieties of Historical Writing,” he compared two kinds of historian, the “vivid” and the “technical,” or in his more colorful terms, the “butterfly” and the “caterpillar.”  Ihor himself was clearly both of those creatures.  In 1971 he published a stunning piece of “caterpillar” detective work, “The Date and Author of the So-Called Fragments of Toparcha Gothicus,” which surgically unmasked historical fraud perpetrated by the nineteenth-century Franco-German scholar Karl Benedikt Hase.

Ševčenko’s bibliography easily cleared the 200 mark. His collected Byzantine papers were issued in two volumes, while his contributions over a lifetime to Byzantino-Slavic and Ukrainian cultural and historical matters were also published in a pair of volumes.  A major intellectual force in Byzantine and Slavic studies on both sides of the Atlantic, he was for ten years President of the Association Internationale des Études Byzantines, holder of two honorary doctorates, member of several learned societies, and recipient of two Festschriften.