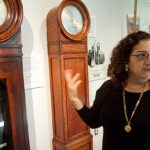 When Steven Wofsy began monitoring carbon dioxide uptake at the Harvard Forest in 1991, he expected to see it slowing down or leveling off entirely as the century-old forest reached maturity.

But results from his measuring devices showed carbon dioxide uptake increasing rapidly. This not only surprised Wofsy, it also raised the prospect that forests were buffering human-caused climate change more than scientists understood, suggesting a significant gap in our knowledge of how forests function.

Wofsy, the Abbott Lawrence Rotch Professor of Atmospheric and Environmental Science at Harvard, and Andrew Richardson, assistant professor of organismic and evolutionary biology, spoke about their research into forests and climate change Wednesday at the Harvard Museum of Natural History (HMNH). The talk, introduced and moderated by HMNH Interim Director David Ellis, was part of the museum’s lecture series on New England forests.

Trees are an important player in climate change because they consume the greenhouse gas carbon dioxide during photosynthesis and lock it up for years in their woody tissue.

Overall, the world’s forests are enormous carbon warehouses, Richardson said. They cover a third of the Earth’s land surface and their inhalations and exhalations are so large, they can be recorded on scientific measurements of global atmospheric carbon dioxide.

When compared with the amount released by human fossil fuel burning — about 8 billion tons a year — Richardson and Wofsy agreed that reducing deforestation could slow the buildup of carbon dioxide in the atmosphere, but by itself won’t solve the problem for humankind.

“If we didn’t have forests to help us out, we’d be in a much worse situation,” Richardson said.

Harvard Forest is fairly typical of New England’s regenerated woodlands in age and make-up—a mix of deciduous and evergreen trees whose large size combined with the forest’s closed canopy give the appearance of a mature forest.

The measurements show otherwise, however. Wofsy’s instruments show that the forest is not only continuing to grow and take up carbon dioxide, but that the uptake is accelerating. Initial measurements in 1991 showed that each hectare of forest took up about 2 tons a year. Even that amount seemed high to researchers for a forest whose growth should have been slowing as it matured, Wofsy said.

They thought they’d see a definite decline as the decades wore on, but the opposite happened. Through the 1990s and 2000s, carbon uptake continued to increase rapidly, reaching as high as 5 tons per hectare a year.

“We figured it would decline with time,” Wofsy said. “Then it doubled.”

Researchers had to face the fact that they really don’t know as much about the region’s forests as they thought they did. Instead of being a mature forest, it appears that the Harvard Forest and, by extension, many of the forests across New England, are middle aged and still growing. Carbon can continue to be stored as trees grow larger and litter accumulates on the forest floor. Even fallen trees can continue to store carbon, releasing it slowly as they decompose. Measurements of Harvard Forest’s trees, Wofsy said, show that oaks in particular are continuing to grow, increasing in girth rather than height.

The growth may also result from climate change, Wofsy and Richardson said. Because trees and other plants take in carbon dioxide, it is possible that higher atmospheric carbon dioxide levels are acting to “fertilize” the forest, inducing it to grow more than it might otherwise. Though this effect is possible, Wofsy said it is difficult to isolate and document.

That’s not the case with temperatures, however. Records show that the average annual temperature at Harvard Forest increased 1.5 degrees Celsius between 1964 and 2010, and both Wofsy and Richardson said there’s considerable evidence that warmer temperatures are extending the growing season.

Richardson, who has established a network of cameras across the country to monitor forests’ annual cycles, said that trees are pushing out leaves earlier in the spring and dropping them later in the fall. By his count, Harvard Forest’s annual growing season has increased by about two weeks, beginning a week earlier and ending a week later.

Wofsy measures the growing season a bit differently and his numbers show an even more dramatic change. By recording the forest’s daily intake and release of carbon dioxide, he can pinpoint the day each spring when new growth causes the forest to absorb more carbon dioxide than it releases and the day in the fall when the opposite happens as the forest shuts down for the winter. By that measure, Wofsy said, the growing season has increased not two weeks, but 50 days over the past 20 years, from 130 days in 1991 to 180 days today.

“How big can Harvard Forest get? It turns out nobody actually knows the answer to that question,” Wofsy said.