From marsh to Yard 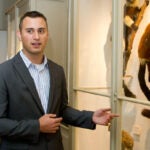 It’s been a bittersweet Thanksgiving week for students and archaeologists digging in Harvard Yard.

Sweet because they found a major feature — a covered stone drainage ditch buried four and a half feet down that was likely an early step in transforming what was a low, wet, marshy place to the high and dry Yard of today.

Bitter because the find, thought to date to the 1700s, came just days before the end of the autumn digging season, when Harvard’s landscaping crew fills in the pit until the dig resumes again nearly two years from now.

“There’s a certain pain that comes with this profession,” instructor Christina Hodge said, looking thoughtfully into the 9-by-12-foot pit that students had dug over the last four and a half months. “There are a lot of challenges with archaeology.”

The dig is in a corner of Harvard Yard near Matthews Hall. It has been excavated by students enrolled in “The Archaeology of Harvard Yard,” which is taught by specialists from the Peabody Museum of Archaeology and Ethnology every other year.

Summer School students began the dig in late June and handed off their trowels in September to Harvard College students, who ended their work Monday. Many of the students who dug this fall will assemble inside for a spring term laboratory course, where they will clean, examine, research, and catalog their finds.

When the course was last held in 2009, the final days of digging offered a similar find, a foundation trench that likely belonged to the Indian College, one of Harvard’s original buildings that housed the first Native American students and a printing press that produced North America’s first Bible.

Even before discovering the culvert, this year’s students had made some interesting finds, including coins possibly dating to the 1690s, a spoon from the 17th century, and a shoe buckle from the 18th century.

Late last week, the diggers uncovered what looked superficially like a stone path, two and a half feet wide and 9 to 10 feet long. It was made of large pieces of Cambridge mudstone, a common building material that Hodge said was once quarried at the site of the present-day Fogg Art Museum. Voids between the stones indicated that the diggers had uncovered the top of a hollow structure. A measurement through one of the voids indicated a depth of 40 centimeters.

With landscaping crews scheduled to fill in the dig today, a crew of three continued working Monday, carefully documenting each stone before removing some to see what was underneath.

They found a ditch lined with stones on each side and on top, with the bottom made of soil.

Hodge and fellow instructor Patricia Capone said the Yard was originally much wetter than it is today. Early accounts by Harvard officials spoke of buildings deteriorating badly, which could have been due to excessive moisture.

“It’s pretty exciting … that you can excavate in Harvard Yard and find something that significant and that far down,” Capone said.

Junior Emily Mayer, a history concentrator who missed the day when the stones were first uncovered, was working Monday, happy to have a glimpse of Harvard’s past.

“It’s been fantastic. When I was little, I always thought that you’re not going to find anything in your own backyard, but here we are,” Mayer said.

As one of their last acts at the site, Capone and Hodge covered the bottom of the pit with a tarp. Landscaping crews will cover that with the nearby piles of dirt dug painstakingly out of the pit over the past few months. The tarp will both protect the culvert and allow students and instructors to quickly dig down to its level when the course is next offered, in 2013.