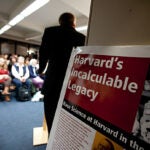 President Drew Faust paid a visit to the popular undergraduate course anthropology 1010: “The Fundamentals of Archaeological Methods and Reasoning.” Faust’s Nov. 17 attendance was inspired by a special meeting of the course at the Office for the Arts’ Ceramics Studio, where students learned how pottery is made and got to try their hands at making their own pieces.

“I’ve been hearing about the ceramics studio for a long time, so I’m excited to come and visit,” Faust said. “This is a perfect example of the way the arts can meld into the undergraduate curriculum and serve as an important teaching tool for the big questions that archaeology and anthropology pose.”

The class, part of the College’s General Education curriculum, is a collaboration between the Office for the Arts and Department of Anthropology. It focuses on teaching undergraduates the basic principles of anthropology and archaeology. Associate Professor of Anthropology Rowan K. Flad, the course leader, told Faust that he brought his class to the studio so that students could get firsthand knowledge of the ways that ceramics were produced at different times in different parts of the world.

“Students involve themselves in different aspects of ceramics production,” he said. “The idea is to give them a sense not only of how pottery is made, but also of how the different methods can be observed in anthropological terms.”

Flad was assisted by Matthew J. Liebmann, an assistant professor of anthropology, who noted that the visit to the ceramics studio was not the first hands-on experience students had had in the course.

“Everybody in the course has a little archaeological experience because they all took part in an excavation in Harvard Yard,” he said. “So everybody has been in the dirt at least one day.”

Faust watched with interest as small groups of students — most taking their first-ever anthropology course — moved between six different stations to learn how ceramics were made hundreds of years ago in Asia, South America, and Western Europe. At one station, students learned to identify the region from which a piece of ceramics came by the type of clay found there. At another, they learned from a Peruvian potter how potters from that country paddled pieces to make them smooth and round.

Yvette Wowolo ’15 was handling and analyzing ancient ceramics from China and Iran when Faust came by. Wowolo was too busy with an in-class assignment to say hello, but said there were some things she’d tell the University president about her experience in class if she could.

“I’m learning a lot about where we come from,” she said. “By looking at this pottery, I learned what kind of materials the pieces are made from, where the materials were found, and how they’re actually formed. It’s all about how we became who we are today.”