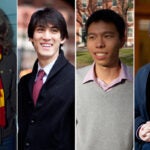 ‘One of the great case teachers’ at Harvard Business School

Harvard Business School (HBS) Professor Emeritus Charles M. Williams, a renowned authority on commercial banking and a master of the art of case method teaching who influenced the lives and careers of thousands of M.B.A. students and executives around the world, died of congestive heart failure on Nov. 17, at the North Hill retirement community in Needham, Mass. He was 94 years old.

At the time of his death, Williams was the School’s George Gund Professor of Commercial Banking Emeritus. From 1960 to 1966, he had served as the Edmund Cogswell Converse Professor of Finance and Banking.

During his distinguished career, Williams established himself as “one of the great case teachers and promoters of the case method at Harvard Business School,” said Samuel L. Hayes III, the Jacob H. Schiff Professor of Investment Banking Emeritus. “He was dynamic and effective in making problems come alive in the classroom.”

More than two dozen of his students went on to join the HBS faculty, including Hayes and former Dean John H. McArthur Jr., who once observed, “As a teacher, researcher, author, wise counsel, and good friend, Charlie Williams has had an enormous impact over the years on all of us at HBS as well as upon the entire banking industry.”

According to Stephen A. Greyser, the School’s Richard P. Chapman Professor of Business Administration Emeritus, “Charlie Williams was one of the most influential HBS professors during his tenure on the faculty. At our 50th M.B.A. reunion, we surveyed the Class and voted him first among professors who had had an impact on our careers.”

Williams joined the Harvard Business School faculty in 1947 and retired from the active faculty in 1986 after a long association with the School that began when he was an M.B.A. student from 1937 to 1939. He initially taught in the required first-year finance course and then moved on to teach his signature class, “Management of Financial Institutions,” one of the School’s most popular second-year M.B.A. electives. His two sections of the course were consistently oversubscribed.

Charles Marvin Williams was born on April 20, 1917, in Romney, W.Va.  He received his first lessons in banking from his father, a local banker who had lived through the Great Depression and who passed on to his son a sterling sense of integrity. “My father,” Williams once said, “gave me a respect for the fundamentals: Know your customers and work with them.”

Williams earned his bachelor’s degree in history and economics at Washington and Lee University and graduated in three years as a member of Phi Beta Kappa. Accepted by Harvard’s M.B.A. program at the age of 19, he earned his degree in 1939 and worked for two years in the loan department at Manufacturers Trust in New York City before volunteering for active duty in the U.S. Navy.

Commissioned as an ensign, he found himself back in Boston in the U.S. Navy Supply Corps School, which was located on the HBS campus. He was then assigned to the aircraft carrier USS Lexington as a paymaster. In May 1942, the carrier was sunk by the Japanese in the Battle of the Coral Sea.

Williams then returned to the United States and was assigned to shore duty, which included teaching in the Naval Supply Corps School at Harvard and then a new posting in the Pacific. His academic career was launched in earnest just by chance. Assigned to teach in a Navy ROTC program at the University of Michigan, he asked the dean if he could take some courses in the graduate business school in his spare time. Instead, the dean drafted Williams to teach 150 students business and finance. After a year at Michigan and a discharge from the Navy in 1947, Williams joined the HBS faculty as an assistant professor. He earned his doctorate in commercial science in 1951 and was promoted to associate professor. He became a full professor with tenure in 1956.

Beyond his unique skills in the classroom, Williams was the author or co-author of hundreds of cases as well as numerous articles and several books, including “Basic Business Finance,” one of the seminal textbooks in the field.

While Williams especially enjoyed working with M.B.A. students, he was also involved in Harvard Business School’s executive education programs. He was a member of the initial faculty group for the School’s International Senior Management Program (now part of the Advanced Management Program) in Switzerland and also taught in locally sponsored programs in places such as Italy, Japan, Venezuela, the Philippines, Holland, Mexico, and England. Under the sponsorship of the American Bankers Association, he led conferences and seminars for top officers of the nation’s largest banks and taught in the Senior Bank Officers Seminar for presidents of small banks — sessions held at HBS for many years and attended by approximately 2,300 executives. In the 1960s, he taught numerous HBS alumni seminars on topics such as mergers and acquisitions.

Among the awards he received was an honorary degree from Washington and Lee University in 1966 and the Distinguished Service Award from Harvard Business School in 1990.

In addition to his wife, Betty (Elizabeth Huffman), Williams is survived by their children, Andrea of Cambridge, Mass., and Holland of Boise, Idaho; and three grandchildren.

A memorial service will be held at the First Parish Church of Weston on Dec. 3 at 10:30 a.m.