Cancer clues from another species 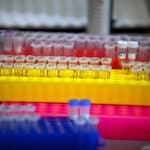 Researchers decode genome of naked mole rat, which doesn’t get that disease

Harvard researchers have decoded the genome of a creature that may prove an unlikely ally in the fight against both cancer and aging: the naked mole rat.

The animal, which lives in large, underground colonies, has many attributes that cause it to stand out from its mammalian relatives. Most important for medical research is that it has never been observed to develop cancer, and lives far longer than the mice and rats that are its best-studied relatives, according to Vadim Gladyshev, a professor of medicine at Harvard Medical School and Harvard-affiliated Brigham and Women’s Hospital.

Naked mole rats, which are native to equatorial Africa, are one of only two known eusocial mammals that live in colonies headed by a queen, who does all the breeding. The animals, hairless, with poor eyesight and protruding teeth, are adapted to living in the dark and in a very low oxygen environment that has high levels of carbon dioxide. They also have trouble regulating their body temperature and don’t feel certain types of pain.

Gladyshev led a team of researchers from several institutions in the work, which decoded the naked mole rat’s genome and analyzed the genes for several key attributes. Gladyshev and his team found that the naked mole rats have 22,561 genes — in the same ballpark as humans and other mammals — and diverged from mice and rats about 73 million years ago.

Researchers identified genes that have undergone positive selection and amino acids that uniquely changed in the animal, a first step in identifying those genetic changes that underlie its unusual features. They also examined gene expression in a 4-year-old and a 20-year-old naked mole rat to begin to understand how the animals’ bodies change as they age.

Their bodies change very little with age and differently than ours, it turns out. A recent examination of human aging showed 54 genes whose functions change as people age, 33 of which slow down and 21 of which speed up. When researchers looked at those genes in the naked mole rat, they found that 30 of them showed no change at all and two did the opposite of human genes.

Gladyshev said the work provides a jumping-off point for researchers to examine the genetic roots of cancer and aging, research that will continue in his lab.

“It is a starting point,” Gladyshev said. “These days the genome is the foundation for biological research and this applies to naked mole rats, too.”

Before this work, Gladyshev’s lab focused on redox biology and determining the role of trace elements in the human body. He didn’t even know about naked mole rats until four years ago when, during a visit to San Antonio, he sat next to a researcher who worked with them. Gladyshev’s first work with the animals involved their metabolism of selenium, a trace element important in human health but in which naked mole rats are deficient.

After working with the animals on that project, Gladyshev became intrigued with their unique biology enough to embark on the work to decode their DNA.

“Once you work with the animals, you become attached. They’re very nice animals that provide insights for various areas of biology and medicine,” Gladyshev said.