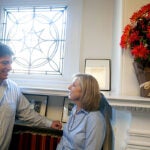 A Harvard perspective on military service

“Let’s go!” the legend in a black track suit and white sneakers yelled at the members of the Harvard men’s basketball team. “Back door! Run it! Follow!”

The Crimson hoopsters got a thrill on Sunday when Hall of Fame coach Larry Brown led them through their paces in front of more than 150 youth, high school, and college coaches from in and around New England. The drills and accompanying lecture at Lavietes Pavilion were part of the annual Harvard Men’s Basketball Coaches Clinic, now in its fifth year.

Harvard men’s basketball coach Tommy Amaker introduced Brown, saying that he was “thrilled and fortunate” to host “a legend in the world of basketball who has done and seen everything in this game.” Amaker said that Brown spent two days with the Crimson to observe the team and participate in the clinic.

Brown told coaches that he had rarely known a player who didn’t want to get better. He said that it was often a challenge, though, to teach young players the difference between coaching and criticism, a lesson Brown said that he had learned himself as a young player.

Brown said that he always tried to be clear with his players about his approach and values, and about what he demanded from his team.

“[I told them] ‘I can’t stand guys taking bad shots,’” he said. “‘I can’t stand guys passing the ball and standing around.’ We always had to take great shots, to play harder than our opponents, and to run back to make sure we weren’t giving up any easy baskets.”

Brown told coaches to get their players to run the floor. He said they should sometimes back off on play calling, and that a fast-paced style of play works particularly well with young players, who grow up playing a wide-open schoolyard game.

“If you steal the ball and everybody’s running, you’ll get a lot of easy baskets,” he said. “Get the ball up the court as fast as you can, even if you’re way ahead. When I was at Philadelphia, if you didn’t run with Allen Iverson, you had no chance of getting the ball, so our big guys got out in front.”

The coach brought the Harvard men onto the court for a series of drills to show the audience what he meant. He had players run the floor three at a time moving the ball with passes only, no dribbling. He yelled at big men like Crimson star Keith Wright to get out in front of the speedier guards, meet the ball in the air, and lay it up for an easy score.

Brown delighted the audience with stories about his time coaching the 76ers and star point guard Iverson. Brown said that Iverson, who was notoriously difficult to coach, had tremendous talent and the will to win. He surrounded the guard with players who complemented his style and allowed Iverson to play his type of game. He suggested that the coaches in the audience do the same with their players.

“[Iverson’s teammates] respected that he was trying to win and never let what he did affect what they were trying to do,” Brown said. “When you give a kid on your team a role and he does it, reward him for that.”

In closing, Brown thanked Amaker, calling him unselfish and an “unbelievable resource” for the local basketball community. He shared a final piece of coaching wisdom.

“We all have a responsibility to make the game better,” he said. “Help your kids to enjoy it, and give them a chance to be special. If you get them to play hard, play together, and play smart, you’ll accomplish a lot and get them in great shape.”