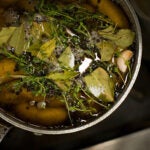 A combination of two drugs may alleviate radiation sickness in people who have been exposed to high levels of radiation, even when the therapy is given a day after the exposure occurred, according to a study led by scientists from Harvard-affiliated Dana-Farber Cancer Institute (DFCI) and Children’s Hospital Boston.

Mouse studies of other potential therapies suggest they would be effective in humans only if administered within a few minutes or hours of radiation exposure, making them impractical for use in response to events involving mass casualties.  In contrast, the larger time window for administering the two-drug regimen raises the prospect that it could become a mainstay of the response to public health threats such as a nuclear power plant accident or nuclear terror attack.

In a paper published online by the journal Science Translational Medicine, the scientists report the beneficial effects, in mice, of a combination of a fluoroquinolone antibiotic (similar to the commonly used human antibiotic ciprofloxacin, or “Cipro”) and a synthetic version of the natural human infection-fighting protein BPI. Mice that received the combination a day after being exposed to high doses of radiation fared far better than mice that received neither or only one of the agents. Whereas radiation exposures of that magnitude almost always prove fatal within a month, 80 percent of the mice that received the two agents were alive and apparently healthy a month into the study.

The study’s lead author is Eva Guinan of Dana-Farber, and the senior author is Ofer Levy of Children’s Hospital Boston. Guinan is an associate professor of radiation oncology and Levy is an assistant professor of pediatrics at Harvard Medical School.

The investigators also found that the ability to generate new blood cells — which can shut down in the aftermath of radiation exposure — rebounded much more quickly and vigorously in the mice treated with fluoroquinolone and rBPI21 (the synthetic version of BPI), potentially contributing to their return to health.

“Both fluoroquinolone antibiotics and rBPI21 have been shown to be quite safe in humans,” said Levy. “Their combined effectiveness in our study involving mice is an indication that they may be equally beneficial in people.”

The research potentially represents a major step in the United States government’s efforts to build a stockpile of therapies to counter radiological dangers.

“There is great interest in creating systems for dealing with the short- and long-term health risks of a significant release of radiation, whether from an accident at a nuclear power plant, an act of terrorism, or even a small-scale incident in which a CT machine malfunctions,” said Guinan. “Developing useful agents has proven difficult.  Most existing drugs aren’t effective enough and must be given within a very short time frame to provide any benefit.  The recent disaster at the Fukushima nuclear power plant in Japan illustrates the need for agents that can be deployed rapidly to treat large populations.”

Radiation sickness, also known as acute radiation syndrome, varies with the amount of radiation an individual receives.  The first signs of the disease usually are nausea and vomiting, which can be followed by fever, dizziness, weakness, bloody vomit and stools, difficulty breathing, and infection. The body’s blood-making tissue, nervous system, digestive tract, lungs, and cardiovascular system all can be affected.  At very high doses, radiation is usually fatal.

Within the body, the effects of heavy radiation may include leakage of bacteria and the toxins they produce into the bloodstream from the digestive tract or through broken skin.  Radiation effects play havoc with the function of the heart and lungs, disrupt the process of blood coagulation, and inflame tissue throughout the body.

When bacteria or certain toxins enter the blood under normal conditions, the body’s immune system responds by dispatching neutrophils — white blood cells — to destroy the intruders.  The neutrophils release a payload of BPI (bactericidal/permeability-increasing protein), which sticks tightly to molecules called endotoxins on the surface of the bacteria.  The binding not only helps BPI kill the bacteria but also blocks inflammation caused by live or dead bacteria — something that conventional antibiotics do not do.

When a person is exposed to high levels of radiation, however, the ability to generate neutrophils is almost obliterated.  “It’s a perfect storm of disease-causing events,” Guinan said. “Radiation results in bacteria and endotoxins entering the bloodstream at the same time that the body’s defenses are lowered.”

The treatment approach developed by Guinan, Levy, and their colleagues takes direct aim at two potential contributors to radiation sickness: bacteria and the endotoxins on their surface

In the study, researchers exposed mice to radiation levels of 7 gray (by comparison, the amount emitted by a standard X-ray machine is 0.01 grays.)  At those levels, radiation is 95 percent lethal to mice within 30 days.

Twenty-four hours after the radiation exposure, researchers began treating some of the mice with daily doses of fluoroquinolone antibiotic, some with twice-daily doses of rBPI21, and some with both.  The mice that received both agents not only had much higher survival rates than the others, but their ability to generate new blood cells also recovered much more quickly.

The promise of this approach is underscored by the nature of the two agents, the study authors said.  Both have a proven safety record in humans and can be stored for long periods of time, making them suitable for stockpiling.

The current study is the product of five years of work and collaboration between Levy, Guinan, and their associates.  “My experience in the field of stem cell transplantation, including the use of total-body irradiation, and caring for patients with diseases of the bone marrow has been a perfect complement to Ofer’s expertise in neutrophil function and innate immunity [the arm of the immune system that is the first line of defense against infection],” Guinan said. “This result is a promising new strategy for response to a nuclear event.”

Funding for the study was provided by the U.S. Defense Advanced Research Projects Agency, the Dana Foundation, the National Institutes of Health, the G. Green Foundation, and the Shea Family Fund.