Actually, the star’s a turkey 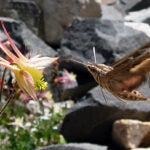 And it’s the plants that round out Thanksgiving’s feast

For an evening, Thanksgiving’s plants shoved the big, basted bird aside and claimed the center of the dining room table.

In the eyes of a botanist, the year’s biggest meal is a celebration not so much of our feathered friends, but of the plants in our lives: the potatoes, carrots, cloves, lettuce, celery and sage, of all the holiday foods that people savor, from stuffing to cranberry sauce to pumpkin pie.

Pamela Diggle, a visiting professor of organismic and evolutionary biology, took a lecture hall full of Arnold Arboretum visitors on a botanical tour of America’s favorite food holiday on Wednesday (Nov. 16). She explained that though the turkey is the star of the day, the plants on the menu give it that extra oomph.

“A lot of the textures, flavors, and aromas come from the plants in that dinner,” Diggle said.

Diggle can be forgiven if she views the nation’s annual poultry pig-out through a plant perspective. After all, as a botanist from the University of Colorado and a visiting professor at Harvard, she has made a career of studying plant development and evolution.

Thanksgiving’s plants are just doing what we all do, Diggle said: making a living, setting something aside for a rainy day, and looking for love. It’s the strategies that particular plants employ in those pursuits that make them delectable.

Potatoes, which are really just modified stems that have lost their way and burrowed underground, are the plant’s way of getting through hard times, namely, the long, cold winter when their leaves have withered and photosynthesis’ sugar factory is shut down.

Carrots employ the same strategy — storing sugars for the winter — but in a different body part. A carrot’s sweet, orange, edible tissue is basically the same as the wood and bark of a tree, modified to store sugar. Sweet potatoes and onions are saving for a rainy day, only each with different strategies. Sweet potatoes are actually modified roots of a vine, while onion bulbs are modified leaves. An onion leaf is green on the top, but the bottom stores food for the cold months, swelling and wrapping entirely around the tiny stem (the hard part we cut out).

Leaves — the site of photosynthesis — are where a plant makes a living and are full of nutrients. Lettuce, of course, is just a leaf that we eat. We discard the leaves of celery, however, and eat instead the leaves’ petiole, or stalk, fleshy and swollen all out of proportion, but still containing the stringy tubes that carry water up and sugars down from the leaves.

Flowers — a plant’s advertisement for love — are the one part that we don’t eat a lot, Diggle said. But Thanksgiving’s bounty does include a flower: clove, which flavors pies and other foods.

Most of these examples are parts that the plant would rather we didn’t eat, thank you very much. In fact, many flavors come from the plants’ ongoing chemical warfare against insect pests, animal browsers, and even other plants, Diggle said. The flavors and oils are an effort by the plant to preserve its winter stores and leafborne nutrients from raiders just like ourselves. In cabbage and Brussels sprouts, for example, the ingredients that provide the tangy taste and smelly aroma are isothiocyanates, a relative of cyanide. From the standpoint of cabbage and Brussels sprouts, they may not have quite gotten the formula right.

Fruits, on the other hand, are the part that plants want us to eat. Fleshy fruits are a plant’s way of attracting animals and birds to eat and disperse the seeds that were contained within. Humans, always a troublesome lot, have worked out a way to ruin even that. Just ask wheat. Bread flour, of course, comes from wheat. But instead of dispersing wheat seeds, we destroy them, grinding them up and separating the contents. We make the endosperm, which is intended to nourish the seed’s embryonic wheat plant, into white flour. We strip off the seed coating, which is tough and intended to protect the seed from predators like us, and we call it wheat bran. As for the baby plant itself, we separate it out and sell it as wheat germ.

“Poor wheat, just trying to raise a family, and then we come along,” Diggle said.

Pumpkins and cranberries are other fruits employed to round out the Thanksgiving feast. Pumpkins have added an extra set of tubes that carry sugar from the leaves to the fruit, enabling them to grow to impressive sizes over just three months, while cranberries have an extra dose of pectin, making cranberry sauce a snap.

Despite a botanists’ passion, however, turkey is still king at Thanksgiving. So as her talk ended, Diggle’s attention finally moved from the plants to the bird. Even there, we have plants to thank, she pointed out. But no, unlike a carrot, a turkey is not modified tree bark. And unlike potato or celery, it’s not a stem or a stalk. It’s not a modified root or leaf or flower. But farmers do feed grain to turkeys, Diggle pointed out, and turkeys do turn that grain into meat.