A road map to cleaner energy 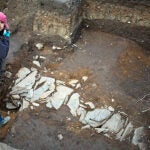 From marsh to Yard

The report, “Transforming U.S. Energy Innovation,” was released by the Energy Technology Innovation Policy research group in the Kennedy School’s Belfer Center for Science and International Affairs. It stemmed at least partly from surveys of U.S. businesses involved in energy innovation and of 100 experts on energy technology. The surveys sought to identify promising areas of energy innovation and the best strategies to promote their adoption by private industry.

The report said that an energy revolution is needed to reduce U.S. and world reliance on fossil fuels and move toward a clean energy economy. That revolution is needed because of environmental factors, including human-caused climate change, national security considerations — driven by the fact that so much fuel comes from volatile parts of the world — and concerns about future economic competitiveness in the multitrillion dollar clean energy market.

Associate Professor of Public Policy Matthew Bunn, one of the report’s authors, said the pressures of global climate change mean that the transition to cleaner energy has to occur more rapidly than past conversions.

“Fundamentally, we have a huge challenge before us,” Bunn said at a Washington, D.C., news conference to release the report. “The past transitions of this kind have taken decades. But we just don’t have that kind of time.”

Researchers found that a dramatic increase in U.S. spending on energy research, development, and demonstration would repay itself many times over, and they recommended roughly doubling spending, to $10 billion annually.

At the news conference, Bunn acknowledged that such an increase would be a tall order as the government struggles to reduce spending and cut federal deficits. Still, he argued that the payback would be enormous, not just from energy efficiency savings, but also because U.S. businesses will be able to market the new energy technologies globally. Funding sources also could be found that don’t increase the deficit, Bunn said. For example, in the past, a charge levied on natural gas was dedicated to research, resulting in major advances for the industry.

The report recommends investing in a broad portfolio of technologies, but most heavily in four main areas: energy storage, bioenergy, efficient buildings, and solar photovoltaics.

For the investment to pay off, however, industry has to be prodded to adopt the new technologies that result. That can be accomplished by putting a price on carbon emissions, setting strict clean-energy standards, or making regulatory changes that create market pressure to adopt or develop energy innovations.

The report acknowledges that the private sector is a key player in the effort, given that most of the country’s energy system is in private hands. The report also encourages the government to support private technology demonstration projects.

In addition, the report recommends reforming how the United States manages its national laboratories in order to maximize innovation, and it also backs supporting a suite of programs to promote innovative ideas and products at all development stages.