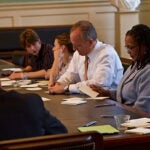 To stop and say thanks

Stephen Greenblatt, the Cogan University Professor of the Humanities, has won the National Book Award for nonfiction for “The Swerve: How the World Became Modern,” which describes how an ancient Roman philosophical epic helped to pave the way for modern thought.

In accepting the prestigious award, the Harvard professor told attendees that his work is “about the power of books to cross boundaries, to speak to you across space and time and distance.

“I’m tremendously honored and deeply moved,” Greenblatt said. “My book is about the magic of the written word and about the strangeness of a poem that was written 2,000 years ago, a great and difficult poem that disappeared for 1,000 years and then came back.”

Greenblatt’s book tells the story of a Roman epic poem, “On the Nature of Things,” by Lucretius, that 2,000 years ago posited a number of revolutionary ideas: that the universe functioned without the aid of gods, that religious fear was damaging to human life, and that matter was made up of very small particles in eternal motion, colliding and swerving in new directions.

Once thought lost, the poem was rediscovered on a library shelf in the winter of 1417 by the humanist scholar Poggio Bracciolini. The copying and translation of this ancient book helped to fuel the Renaissance, inspiring artists such as Botticelli and thinkers such as Giordano Bruno. It helped to shaped the thought of Galileo, Sigmund Freud, Charles Darwin, and Albert Einstein, and it had a revolutionary influence on writers such as Montaigne and William Shakespeare, and even on Founding Father Thomas Jefferson.

Established in 1950, the National Book Award is given to writers by writers. A pantheon of authors such as William Faulkner, Ralph Ellison, John Cheever, John Updike, Katherine Anne Porter, Norman Mailer, and Flannery O’Connor have won the Award.

The awards are administered by the National Book Foundation, which recognizes authors annually in four categories: fiction, nonfiction, poetry, and young people’s literature.

Among Greenblatt’s other books is “Will of the World: How Shakespeare Became Shakespeare,” which was a finalist for the 2004 National Book Award in nonfiction and was a best-seller. He holds honorary degrees from Queen Mary College of the University of London and the University of Bucharest.