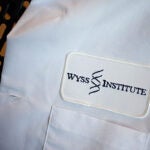 Rachelle Gaudet will forgive you if you mistake the colorful, spaghetti-like shapes displayed in six small framed pictures on her office wall for modern art.

That’s because Gaudet, a professor of molecular and cellular biology (MCB), also sees beauty in the images, which depict proteins whose structures were worked out by two of Gaudet’s mentors, Paul Sigler at Yale and Don Wiley at Harvard.

Today, Gaudet, students, and fellows in her Northwest Building laboratory specialize in structural biology, studying how form influences function in large biological molecules. In nature, several factors can influence how a molecule behaves. The most basic involves the atoms that make up the molecule. A molecule made of oxygen and hydrogen will behave differently, for example, than one made up of nitrogen, hydrogen, and carbon.

But a molecule’s physical structure also can be important, particularly in the case of biological molecules such as proteins, which contain thousands of atoms. Such long molecules naturally fold in on themselves, creating intricate structures that can expose certain atoms and hide others. A protein molecule can change how it functions by exposing or hiding active sites, or sets of atoms with particular properties like the ability to attract other molecules, among its structural folds. It’s the same molecule; it just behaves differently. Proteins can be affected by many chemical and physical cues.

Take heat, for example. Gaudet is studying the structural biology of people’s perception of temperature, specifically how we sense hot temperatures. Embedded in human nerve cell membranes are proteins called TRPV1, made up of roughly 800 amino acids. Four of these enormous molecules form a single functional unit, or channel. When TRPV1 channels detect temperatures above about 40 degrees Celsius, or 104 degrees Fahrenheit, the molecules change shape and create a pore in the membrane. This allows charged ions to cross into the cell, creating a “hot” signal that travels down the nerve cell to the brain.

Though our hot-sensing protein, TRPV1, is normally triggered by temperature, Gaudet said it also responds to the chemical that gives chili peppers their heat, capsaicin, which is why people feel extreme heat when they eat chilies, but they leave no lasting damage.

Three people in Gaudet’s lab are dedicated to figuring out the 3-D structure of that temperature-sensing protein, she said. So far, they have discovered several mechanisms by which these temperature-sensing channels adapt to their stimulus, either increasing or decreasing their sensitivity, depending on conditions.

Another major research focus, being conducted in collaboration with Professor of Neurobiology David Corey at Harvard Medical School, centers on the sense of hearing. When a sound wave strikes the ear, it vibrates a bundle of hair cells. The physical stimulus of the hair bundle motion is transformed into an electrical signal that travels along the auditory nerve to the brain, where it is perceived as a sound. Gaudet and Corey are studying proteins that convey the mechanical tension generated by the vibrations to the hair cell protein channels that generate the resulting electrical signal.

Proteins like the hot-sensing TRPV1 and the hair cell apparatus that senses vibrations and motions play a key role at the intersection of the physical stimulus and its transformation into an electrical signal that travels to the brain. Such proteins fascinate Gaudet the most.

Gaudet, who was named a professor of molecular and cellular biology earlier this year, has long been interested in the structures around her. She grew up thinking she would become an architect, because that would allow her to blend her scientific and artistic sides. But she was drawn further to science through a high school chemistry class.

“I’m not an architect, but I study the architecture of proteins,” Gaudet said.

During her undergraduate studies at the University of Montreal in her native Canada, a course on enzymes had a heavy focus on the structure of the molecules. Gaudet realized that if she understood the structure, she could better understand how the molecule worked. That knowledge of the importance of structure put her on the present path of her work.

Gaudet received a doctorate from Yale in 1998, with Sigler as her adviser, and came to Harvard to do postdoctoral work in the lab of Wiley.  She became an assistant professor of molecular and cellular biology in 2002 and an associate professor of MCB in 2006.

Gaudet could have had a promising career in corporate research, but enjoys the mentoring relationship with students and fellows too much to give up what she does. She looks back fondly on her time in the labs of Sigler and Wiley, and said she tries to be as supportive a mentor as they were. Gaudet also serves as head tutor for undergraduate students in the MCB concentration.

“One of the main reasons for me to be in academia is interactions with students and other trainees, like postdoctoral fellows,” Gaudet said. “I get as much satisfaction seeing trainees grow as scientists as I do from research findings.”