Weighing the risks of fracking 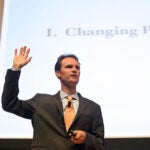 Shale gas has environmental problems of its own, however, and its growth is dependent to some extent on the industry solving those problems, said Susan Tierney, who was assistant secretary for policy at the U.S. Department of Energy under President Bill Clinton. Tierney also led the energy transition team for President Obama and is currently managing principal at the consulting firm Analysis Group.

Tierney spoke at the Northwest Laboratory building in a Future of Energy talk sponsored by the Harvard University Center for the Environment.

Gas from shale deposits has become an important factor in U.S. energy as new technology has increased the supply. Natural gas is conventionally extracted along with oil and other petroleum products from deep underground wells. Shale gas is extracted from deposits of shale rock by drilling wells thousands of feet underground and injecting liquids under high pressure that fracture the rock, releasing the gas. The process, called “fracking,” has become increasingly controversial in recent years, with nearby residents lodging a variety of complaints, including pollution of groundwater sources.

Tierney said Wednesday that pollution and environmental problems do occur in conjunction with shale gas extraction, but because the fracking occurs thousands of feet below the deepest aquifers, problems are most likely tied to how the well penetrates the aquifer rather than the fracking process itself.

“The issues of hydraulic fracturing are less about the fracturing than they are about drilling through the aquifer,” Tierney said.

Along with groundwater problems, chemical spills have polluted surface water sources, and methane releases have caused smog to form in communities where shale gas is being extracted. In rural areas, heavy truck traffic has been an issue.

Many of those complaints are resolvable, however, if companies pay more attention to safety and if regulators keep a closer eye on gas extraction operations, Tierney said. One challenge is that some regions where shale deposits are found do not have the regulatory framework of oil-drilling states such as Texas.

Along the Appalachian Mountains, for example, drilling operations have increased dramatically. In Pennsylvania alone, permits for well drilling increased from fewer than 100 as recently as 2007 to more than 3,000 in 2010.

“This is a pace of development that is extraordinary,” Tierney said.

Estimates of U.S. gas reserves have more than doubled in the past decade, Tierney said, and projections show extraction continuing its rapid rise. This is expected to drive prices down to the point where gas can challenge coal, which is inexpensive but a significant source of both pollution and greenhouse gas. In addition, if expected federal regulations on downwind air pollution, toxic compounds, and cooling water use are implemented, it may make more financial sense for owners of old coal plants – especially those built before the 1980s — to shutter them and build gas-fired plants.

“There are … market forces making it so that there are lots of opportunities for gas to displace coal,” Tierney said.

Replacing older coal plants with gas plants could significantly reduce greenhouse gas emissions related to climate change, because gas, though it is a fossil fuel, burns cleaner and releases less carbon dioxide than coal does. A recent study indicated that turnover of older plants and increased use of natural gas because of its lower price and greater availability could reduce greenhouse gas emissions from heating, cooling, power plants, and industrial sources by as much as 50 percent. Going beyond that, however, would require the addition of carbon sequestration and other technologies that remove and store carbon.

“It gets you part of the way through market forces; then you have to do something,” Tierney said.

But there will be no end to the controversy around shale gas extraction until the industry cleans up its act and reduces spills, methane gas leaks, water pollution, and truck traffic, Tierney said. What’s needed, she added, is education — to close the gap between what people think they know and what is actually happening. Also needed is the development of a culture of safety within the industry and of regulation within government. Most state oil and gas agencies are tasked with both nurturing and regulating the industry, goals that might not be compatible within the same office. Disclosures on pollution, chemicals, and the amounts of water used would increase openness.

“There’s a lot of gas out there, the benefit depends on the industry doing it right,” Tierney said.