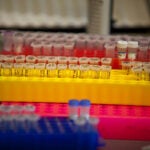 In a discovery that might eventually lead to new biomedical treatments for disease, researchers from Harvard’s Department of Molecular and Cellular Biology have identified two types of RNA that are able to move between cells as part of a process called RNA-interference (RNAi).

RNAi can turn off, or silence, specific genes in plants and animals, and is initiated by introducing long, double-stranded RNA molecules into cells or tissues. Those molecules are then chopped up into small fragments, which act as sequence-specific signals to guide the silencing machinery to the target, effectively silencing the corresponding gene. Though researchers have long known that such signals can spread, silencing the targeted gene in all cells in the animal, this work demonstrates that the mobile silencing signal is RNA.

Three researchers, Craig Hunter, professor of molecular and cellular biology, Antony M. Jose, a former postdoctoral fellow and tutor in biochemical sciences and a recently appointed assistant professor at the University of Maryland, College Park, and Giancarlo A. Garcia, now a medical student at the University of California, Irvine, report that both the long, double-stranded RNA introduced into cells to trigger the RNAi process, and shorter fragments derived from the long RNA, are able to move between cells. Importantly, small RNAs produced by the RNAi process, which direct the bulk of the silencing, are not themselves mobile. This indicates that RNA mobility is selective and therefore regulated. Their research was published Oct. 9 in the online version of the journal Nature Structural & Molecular Biology.

This discovery is a key step in the development of RNAi as a therapeutic with potentially huge effects on medicine. By harnessing the ability to silence specific genes, researchers hope doctors may someday be able to halt a host of genetic diseases and viruses in their tracks with simple, RNAi-based treatments. Understanding the pathways that allow RNA to move between cells is a critical step in developing those treatments.

The discovery of RNAi in 1998 by Nobel laureates Andrew Fire and Craig Mello surprised the scientific community. “Equally surprising, and to me more mysterious, was that the silencing effect spread from cell to cell, and tissue to tissue,” Hunter said. “It was even transported into the organism’s progeny, causing gene silencing in subsequent generations. The simplest, but unprecedented, explanation was that RNA molecules are transported between cells. We have now demonstrated that RNA is the mobile silencing signal.”

The research used genetically modified worms composed of both normal cells and cells that included a mutation that disrupted their ability to process or transport double-stranded RNA. To investigate how RNA moves between cells, Hunter and his team introduced double-stranded RNA into the worms and tracked whether the corresponding gene was silenced in mutant or nonmutant cells.

Ultimately, they were able to deduce that two types of double-stranded RNA moved between cells: One was long, and the other was a modified form of short RNA that could move to and function in mutant cells. Surprisingly, the researchers found that numerous single-stranded, short RNAs produced during RNAi — and that execute the silencing — either could not move to or could not cause silencing in mutant cells.

The next step in his research, Hunter said, will be to investigate why only some RNA molecules are able to move between cells, and to use that knowledge to further the development of RNAi-based medical treatments.

“Our results and follow-up investigations will identify the structural features on the RNA molecules that promote or restrict transport into cells,” Hunter said. “If we can understand what distinguishes those silencing signals, it may help us to understand how to deliver RNA-based therapeutics.”