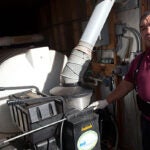 There’s something for everyone, from foodies and fencers to fashionistas and fantasy football fans. With a click of the mouse, users can connect to a world of possibility.

And they can deepen that world just as easily.

The podcasters of today owe a debt of gratitude to a group of Harvard scholars who revolutionized how people create and consume digital information. These scholars streamlined a method of both uploading audio files to the Internet and downloading them to a computer or mobile device.

The origin of the podcast can be traced to two people, in large part: Dave Winer, a software developer and blog evangelist who landed at Harvard’s Berkman Center for Internet & Society in 2003 determined to put the University on the blogging map, and Christopher Lydon, a journalist and radio show host eager to investigate the power of the Internet.

Winer, who graduated with a degree in math from Tulane University, caught the computer bug during a basic programming class. “It was fascinating … for me it felt like math in motion,” he said.

Winer earned a master’s in computer science and became a Silicon Valley staple, heading his own software companies. One of the world’s first bloggers, he also created software that allowed people to create blogs of their own. Then he set his sights on Harvard.

“I wanted more thoughtfulness to be in this space,” said Winer of the blossoming blogosphere. “I was going to get Harvard blogging.”

“Dave was in a hurry. He had big ideas. I sensed that I didn’t want to miss them.  There he was, ready to rock, he said, and what he wanted to work on would be transformative,” recounts John Palfrey, Henry N. Ess III Professor of Law and faculty co-director of the Berkman Center.

“He had a simple idea: Let’s put up a blogs server … and invite anyone in the community to start blogging.”

Winer became a Berkman fellow and created the blog platform Weblogs at Harvard Law School, open to anyone with a Harvard.edu email address. He organized weekly discussion groups around blog tutorials and hot blog topics. He convened the conference Bloggercon at Harvard Law School. And with Harvard’s help, he took blogs to the next level.

Prior to Harvard, Winer had worked with Adam Curry, the MTV disc jockey who envisioned streaming video online via an RSS feed.

RSS, “Really Simple Syndication,” is a clever way to aggregate data on the Web. With it, content creators can make their material available to other sites, and users can access the latest content from such sites in one location.

“It automates your Web surfing,” said Winer, who helped create the original RSS format. Picking up on Curry’s idea, Winer tweaked the RSS design, adding audio attachments to the Web feed formats. He tested it out with a couple of Grateful Dead songs and, suddenly, the framework for podcasting was in place. But Winer realized there was more to do.

“It wasn’t just enough to tell people this thing was there and show them how it worked on a technical level … they had to see you doing it, and they had to be able to imagine themselves doing it.”

In 2003, Lydon, former host of WBUR’s “The Connection,” was also a Berkman fellow and quickly connected with Winer.

He emailed Winer early on and told him, “Yesterday I couldn’t spell blog; tomorrow I want to be one.”

“My idea for Chris,” recalled Winer, “was that he was going to be the voice of podcasting.”

Winer did the heavy technical lifting and Lydon provided his polished interview skills, smooth voice, and seasoned reporter gravitas — as well as a desire to explore the democratization of the new medium.

Lydon and Winer joined forces with Cambridge engineer and Berkman friend Bob Doyle, who connected Lydon with the necessary recording equipment and trained him on how to use it. In July 2003, Lydon interviewed Winer in what would become the very first podcast. Lydon continued to self-produce interviews with bloggers, political figures, and authors such as Julia Child and Norman Mailer. With help from Winer’s special RSS-with-enclosures feed that attached the audio files, they released the interviews to Lydon’s blog, and podcasting was born.

“It was a terrifically interesting moment for me,” said Lydon. “Dave Winer and I … are the Neil Armstrong of podcasting, and now everybody goes to that moon.”

“Podcasting has bloomed every bit as much as I though it would,” said Winer, who went on to develop his own podcasts using simpler audio software and equipment.

“The process started in 2000 but it didn’t reach critical mass until 2004 … and it was because of all the resources that were at Harvard and the people that were there. We had all the essential elements to success.”

“People were certainly recording and putting audio files on the Web … the inventive genius of what this group was doing at the Berkman Center was in turning their work into a series, and into a channel. … The development of podcasting, of video, all of what YouTube has become, those to me are all outgrowths of that innovation.”

The Harvard work represented a perfect storm of curiosity combined with cutting-edge technology. Blogging, RSS feeds, and podcasts emerged alongside cheap audio recording equipment, mp3 files, and the ubiquitous iPod, an inexpensive and easy way to receive audio files, and its corresponding iTunes, a way to “systemize the receipt of it,” said Palfrey.

“It was a confluence of things coming together and the best form of experimentation, of just trying it, of seeing what happens. And podcasting is one of those things that just stuck.”