The newest live in the oldest 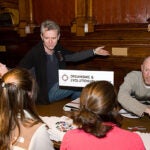 Guides on the undergraduate quest

When Tom Keefe received his Harvard dorm assignment this summer he was perplexed.

“What’s Massachusetts Hall?” the freshman from Sherborn, Mass., wondered. While he had heard about Lionel, Holworthy, Mower, and Weld halls, he had heard nothing about this one.

But Keefe quickly realized “this one was a lot different.”

The oldest building at Harvard and the second oldest-academic building in the country (William & Mary’s Sir Christopher Wren Building in Virginia holds that title), Massachusetts Hall was built in 1720 to meet the growing need for residential space at Harvard College.

The top floor of Mass Hall, as it is commonly known, is still used as a dorm for a small group of students. The remainder of the building serves as office space for Harvard’s top administrators.

Fourteen freshmen, a mix of young men and young women from across the globe, spend their first year at Harvard living three floors above the University president’s office.

In keeping with its close-knit, community feel, on a recent Thursday evening four generations of Mass Hall students gathered in the slightly larger space offered by the neighboring Straus Hall and its common room for an informal reunion.

Over pizza and cookies, the students compared notes about their time in the historic building. They laughed about their attempts to find a way into the attic, the spirits that supposedly haunt the hall, and their mythic status on campus.

Former Mass Hall resident senior Athena Lao recalled two incredulous students who materialized on the building’s top floor one evening during a study break. The pair had snuck in and climbed the four flights of stairs on a vital fact-finding mission.

“They said, ‘Hi, we were just wondering if you were real,’” recounted Lao.

For Lao, the dorm offered lasting connections. She still resides with two students she met while living there, and for the past three years she has been a peer advising fellow (PAF), a type of mentor for new Harvard College students. She said she requested a PAF appointment there so she could “keep helping out future Mass Hall residents.

“There’s just a lot of community spirit that builds there, and that’s just a powerful and wonderful thing to have when you are starting out.”

One of the highlights for the residents of the small entryway is the annual dinner they get to enjoy with Harvard President Drew Faust on the hall’s first floor. This year the menu featured tacos and tortillas, brownies and lemon squares, and casual conversation including topics like the students’ classes, their impressions of Harvard, and whether or not they felt homesick.

Though he was a little intimidated at first to be dining with the head of the University, freshman George Doran said Faust’s casual demeanor helped everyone loosen up and enjoy the evening.

“It was kind of fun to really … see the nonbusiness side of the president.”

On a steamy move-in day in late August, Keefe was given a list of residents who had previously lived in his room. His sheet ticked back to 1939.

“It’s cool,” Keefe said of his new abode. “There are only 14 kids, there’s amazing history, and we are on the top floor.” He and new roommate Doran already had bonded over common interests, including a Nintendo 64 video game and the need for a tall floor fan, which they purchased right after they moved in.

The co-ed mini-dorm is a mix of doubles and singles. Its wooden floors have long been covered with carpet, its many fireplaces boarded up. The rooms are furnished with standard-issue bunk beds, and unremarkable desks and chairs. But the rooms have ample space, are sunny and bright, and have peaked ceilings that add a historic charm.

Instead of missing the exposure that a large dorm can offer, Mass Hall students say they are in contact with a diverse range of residents, from athletes to artists, to would-be engineers, scientists, and doctors. The area’s small size, with one simple, long corridor, they agree, gives the space an intimate feel.

“You get to know each other so well that you become a family,” said senior Cristina Alcorta, a former Mass Hall freshman and current peer advising fellow for students in the dorm, who still has many close friends from her own Mass Hall days.

Susan Cheng, the Mass Hall proctor, likes the small dorm. “I feel like as a proctor in Mass Hall I can really get to know my students very well. I see them every day, so it’s easier to keep in touch with the day-to-day developments of their lives,” said Cheng, a student in the Harvard Graduate School of Education’s Ed.L.D. program who is entering her second year at the dorm.

As proctor, Cheng organizes regular social gatherings and study breaks for the students and helps connect them with mentors from across the University.

“Community building and making Mass Hall like home is very important to me.”

Mass Hall has been transformed several times over the centuries. The building was somewhat less ornate following its use as a garrison for soldiers in the Continental Army during the Revolutionary War, when much of the interior woodwork and brass hardware went missing.

In the 1800s half of the dorm rooms were converted to recitation rooms. Later, the dorms were removed entirely, to make way for lecture halls, offices, and reading rooms. In the 1900s, Mass Hall housed an informal observatory, and the precursor to the modern laboratory (the “Apparatus Chamber” that included equipment acquired by Benjamin Franklin). Following a fire in 1924, the building was converted back to a dorm. In 1939 the lower floors were converted to office space.

Early Georgian in style with a simple construction, symmetry, and modest accents, the building has a special lore on campus. Its famous undergraduate residents include Founding Father John Adams, and curious students have been known to try to sneak into the basement looking for the spot where the second U.S. president allegedly scrawled his name on the wall. They haven’t found it yet.

Then there’s the “ghost.” On windy nights, the attic floorboards creak and groan. Some listeners attribute it to the weather; others may wonder if the spirit of some alumnus is floating around the eaves and chimneys. They haven’t found it yet, either.

But much of the lore surrounds the students themselves. There’s a running joke on campus that spotting a student from Mass Hall is as rare as seeing a unicorn trot in front of John Harvard’s statue, a common refrain from some of the tour guides passing beneath their windows. To combat the rumor, one student made T-shirts for the residents, with the Mass Hall mascot, a golden-horned unicorn, emblazoned on the front.

As he settled in after carting his belongings up four flights of narrow stairs to his new room, Keefe was sanguine about living just above the heart of Harvard’s power. “It’s very nice,” he said, offering Faust an open invitation: “She is always welcome to come up and listen to music with me.”