Standing as a community 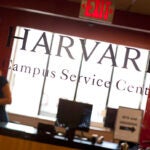 The event, organized by the group Queer Students and Allies (QSA), began at Sever Hall and concluded with a candlelight vigil on the steps of University Hall that both honored the recent progress toward equality for the BGLTQ (bisexual, gay, lesbian, transgender, and queer) community and the suffering many still face as a result of their sexuality.

“On this day, the day after National Coming Out Day, we would like to celebrate our sexual and gender diversity, while simultaneously recognizing the discrimination and harassment that many BGLTQ people, and youth in particular, face,” QSA board member Sam Bakkila ’12 said. “We want to thank everyone here. Your efforts to make Harvard and the world a more welcoming place have transformed coming out from a scary process into something to celebrate.”

Among the administrators who attended the event was Harvard College Dean Evelynn M. Hammonds, who recalled the words of poet and essayist Audre Lorde in her comments, which urged students to continue efforts to make the BGLTQ community visible on campus.

“Audre Lorde was one of the most influential people in my life,” said Hammonds, the Barbara Gutmann Rosenkrantz Professor of the History of Science and of African and African American Studies. “One thing she said that was very meaningful for me was ‘your silence will not protect you.’ Those words made us feel that being open and out and expressing ourselves and claiming our identity was what would make our lives better.”

“Harvard today is very different from the Harvard I came to in 1985,” Hammonds continued. “I think it’s very different in important ways. We still have a way to go, but only by your voices, your activities, and your visibility will we get to where we need to be.”

Harvard President Drew Faust also attended, and reminded students, staff, and faculty that the University must be a shining example of a community where all sexualities are appreciated.

“Every fall, when I welcome the freshman class to Harvard, I tell them to ‘make Harvard yours.’ But when I say that, I’m always aware of the groups for whom that was not possible for so many years,” Faust said. “One of my highest aspirations as president is to ensure that all the members of this community feel that they fully belong here.”

“We at Harvard must strive to build communities, here on this campus and throughout our lives, that promote inclusion and encourage participation, and we must affirm to the world our commitment to ‘making it better’ for future generations,” Faust continued. “Bi, gay, lesbian, transgendered, and queer students, staff, and faculty are an integral part of Harvard University. Let’s all work together to create a future where no one asks, ‘Do I belong here?’ because the affirmative response to the question is already completely clear.”