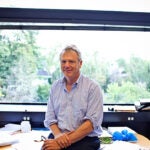 Joseph Murray successfully transplanted a kidney between identical twins on Dec. 23, 1954, at what was then the Peter Bent Brigham Hospital, having perfected the operation in the research laboratories at Harvard Medical School. The terminally ill patient recovered, married his nurse, fathered two children, and lived normally for the next decade.

This unique approach quickly posed new challenges for the team. Among them: how to substitute a healthy donor organ for a failed one in a genetically dissimilar recipient. With knowledge of the intricacies of the host responses against foreign tissues advancing in parallel, Murray’s research team and a few other investigators were able to improve functional survival of transplanted kidneys with a newly defined immunosuppressive drug.

With gathering clinical experience and the introduction of increasingly effective pharmacologic agents to inhibit host responsiveness, the transplantation of a spectrum of solid organs has become increasingly routine throughout the world, currently saving the lives of tens of thousands of patients. The biologically unexplained but compelling success of the transplantation of composite grafts — hands and faces — has become a recent harbinger of even more dramatic advances to come.

The early laboratory and clinical studies of Murray and his successors (for which he received the Nobel Prize in 1990) revolutionized transplantation, have evoked novel approaches against cancer and immune disorders, and opened a range of applications of biology. This venture has evolved into one of the most important scientific advances of our time.