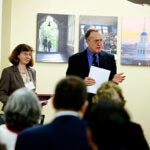 Norman Paul, an innovator in the use of family therapy to treat mental illness, died on Oct. 14. Paul’s wide-ranging career focused on transgenerational family systems and the role of grief as a central influence in problems ranging from individual and marital problems to schizophrenia and epilepsy.

In 1952 he joined the Massachusetts Mental Health Center, and subsequent affiliations included the Massachusetts General Hospital and the Boston State Hospital. He was a founding member of the American Family Therapy Association and the Group for the Advancement of Psychiatry. He was a lecturer and professor of psychiatry at the Harvard Medical School and professor of neurology at the Boston University School of Medicine.  A funeral has already been held.