New sources near for biofuels 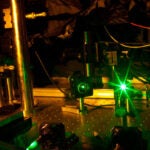 Chris Somerville, director of the Energy Biosciences Institute, said global biofuels are already mainstream, with ethanol from corn totaling 13 to 14 billion gallons annually in the United States, or about 10 percent of gasoline use. In Brazil, it makes up 40 percent of  liquid transportation fuel and powers 15 percent of the nation’s electricity. Current technology is robust enough, Somerville said, that ethanol would be a ready alternative if for some reason people needed to stop using oil immediately.

Somerville spoke at the Harvard Science Center on the topic “The Development of Liquid Fuels from Lignocellulose,” which was part of the Harvard University Center for the Environment’s Future of Energy lecture series. Center Director Daniel Schrag, the Sturgis Hooper Professor of Geology and professor of environmental science and engineering, introduced Somerville, saying that biofuels have fallen somewhat out of favor since the spotlight put on them by the Bush Administration faded. Still, Schrag said, if the country is to address carbon dioxide emissions to fight climate change, biofuels will have to be a bigger part of the liquid fuel mix.

Somerville, who in addition to directing the Energy Biosciences Institute is a professor at the University of California, Berkeley, and a visiting scientist at the Lawrence Berkeley National Laboratory, said the institute was begun with a $500 million commitment from the oil giant BP. The institute’s mission is fairly straightforward, Somerville said: to explore the application of modern biological science to the energy sector. As a result, Somerville said, institute researchers spend a lot of their time investigating biofuels.

The corn ethanol already used in this country has several drawbacks, Somerville said. One major complaint is that corn is a food crop. In an era when people around the world go hungry, some critics believe it is immoral to use it to make fuel. Another problem is that when the equipment and processes involved in planting, harvesting, and transporting corn ethanol are considered, it isn’t much better for the environment than gasoline.

What might make a difference, Somerville said, would be the development of advanced biofuels that get their energy not from corn or sugarcane, as in Brazil, but from hardy, fast-growing plants, like switchgrass, elephant grass, or — Somerville’s favorite — miscanthus. These grasses grow as much as 10 feet high, thrive on land that is marginal for crops, and use little or no fertilizer.

Using these grasses to make biofuel would have a much lower impact on the environment than using corn, Somerville said. Further, Somerville said, these crops can be grown on the globe’s 1.5 billion acres of former agricultural land that has been used, degraded, and abandoned, further reducing the environmental impact that would stem from clearing forest to grow more biofuel crops. There’s another 3 billion acres worldwide that is too dry for agriculture but still is used as grazing pasture, mainly for goats. Those acres could be utilized growing drought-hardy plants like agave for use in biofuels.

“We think there’s quite a bit of land worldwide that might be suitable,” Somerville said.

The drawback to using these crops is that they contain lignocellulose, a tough plant material that needs more processing than either corn or sugarcane to be converted to alcohol. Current processes require expensive factories to manufacture the fuel, with BP’s 35 million-gallon-per-year production plant costing $400 million. That capital expense is the largest single cost encompassed in a gallon of biofuel made through this method, he said.

Somerville said that scientists at the Energy Biosciences Institute are working on improved processes to convert lignocelluloses to fuel, seeking to change what today is a “batch” process — where a vat of plant material is fermented and distilled, then drained, cleaned out, and reused — into a continuous process that will keep equipment running, cutting overall manufacturing costs. Researchers are also looking for ways to make the overall process more efficient by reusing materials, changing the fermenting agent, and searching for better enzymes, such as those used by termites.

Somerville said he thought the national goal of 30 percent of liquid transportation fuels from biofuels is reasonable. Today, the barriers to reaching that goal are not technical, but rather financial and engineering. With a few exceptions, companies are holding off building plants because they’re waiting for improved processes to come along, he said.

“I don’t think this is a finished story,” Somerville said.