New era for the arts 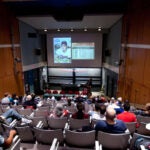 Harvard’s 375th anniversary celebration on Oct. 14 will commemorate centuries of history and innovation and honor the University’s continued dedication to excellence in education and scholarship.

It will also be one heck of a party in Harvard Yard, organized with the help of three people who are ushering in a new era of creativity for the institution.

“This is an extraordinary time in the history of the arts at Harvard,” said Lori Gross, Harvard’s associate provost for arts and culture. “It is exciting to feel the catalytic energy engendered by the influx of these innovative artists in the classrooms and throughout the University.”

Honoring the past while charting a course for the future is central to Harvard’s founding ethos. In keeping with that mission, each newcomer envisions building on the foundations established by their predecessors as they carry the arts forward in challenging new ways.

“They represent the next generation of leadership in arts practice at Harvard,” said Jack Megan, director of the OFA, who was involved in the hiring search for all three. “They are young and ambitious and extremely gifted artists, and they have a view of their fields that is both traditional and pays homage to the past and the great traditions, but also is looking ahead and saying, ‘What else is new, what is interesting, where else could we go?’”

Johnson choreographed a special surprise number for the celebration, one that is true to the event’s intergenerational, inclusive theme.

“It’s a way to create community,” said Johnson, “because I think that is part of what is really to be celebrated here: the Harvard community.”

Such thinking is part of the Canadian native’s broad approach to her new role. As head of the Dance Program at OFA, Johnson is eager to explore other disciplines, incorporating a range of views and visions into the art of dance, expanding the boundaries and culture of the form. She is also eager to collaborate and learn from her peers.

‘There’s a real exchange and a willingness to explore as we get to know each other,” she said. “It feels like a creative hub. And there’s a cohesiveness; there are affinities. It’s an incredible opportunity and incredibly inspiring.”

The three take charge during a time of increasing opportunity and influence for the arts at Harvard. In 2007, President Drew Faust created a task force to examine the place of the arts at the University. A year later the committee released recommendations that included developing General Education courses and freshman seminars that include arts practice; the exploration of a new concentration in dramatic arts and another in architecture; a master of fine arts degree; more and longer stays by visiting artists; displays in new spaces; and creation of an advisory body to continue the work of the task force.

“There is such excitement, and there is this feeling of movement in the arts … and the ability for the arts to be a bigger and more meaningful part of the Harvard community,” said Johnson.
Clark wasn’t looking for a new job when Harvard came calling. An assistant conductor at Harvard under Marvin from 2001 to 2003, he was content at Tufts University, where he was the director of choral activities. But when his former boss encouraged him to apply and discussed the possibilities the Harvard job offered, Clark couldn’t resist.

“There is a lot to do,” said Clark, “and we have a bold and enterprising vision for where we want to go.

As part of that vision, in April the choirs collaborated with the HRO on a challenging and emotionally charged work by Harvard alumnus John Adams, “On the Transmigration of Souls.” The piece, commissioned by the New York Philharmonic Orchestra to commemorate those killed in the terrorist attacks of Sept. 11, 2001, won the 2003 Pulitzer Prize in music. A complex work, it includes pre-recorded sounds and text taken from missing-persons signs posted in New York, comments drawn mainly from interviews that appeared in the “Portraits of Grief” series in The New York Times, and a list of names of the victims.

Clark learned about the 375th celebration last year during his first week on the job. In the ensuing months, he worked closely with the OFA and Cortese to create a piece based on excerpts from Ludwig van Beethoven’s Ninth Symphony that will accompany a slide show with images from Harvard past and present.

“There is a long history of the choirs and the orchestra being involved in major college anniversary events and we are delighted to continue that tradition and  consider it a privilege and a great opportunity to be the ensemble of choice for such a  high-profile event,” said Clark. “Our students are really excited to have that stage.”

Harvard’s “goldmine of talent” is in large part what drew Cortese to the role of director of the HRO.

And while the professional world offers conductors the opportunity to work with sophisticated musicians at the top of their craft, he said that students bring a special desire and passion to “really work at improving something. And that, in itself, is an artistic process.”

The Italian-born director also shares a commitment to excellence with his new colleagues.

“We start from the same thing: How do we convey the importance of quality?” said Cortese. “There’s no art making that makes any sense if it’s not accompanied by training and standards.

“The fact that the three of us are new is a good thing, because I do think that we see things in the same way. At the same time, I think we are aware that we have to take care of our little corner in different ways in order to achieve the same result.”

As part of his vision for HRO, Cortese hopes to develop a solid teaching and training program for student musicians. He also aims to use HRO tours to show the world what the United States has to offer musically and to break down barriers. This past summer, the orchestra traveled to Cuba, where it performed three sold-out concerts, including a performance in Havana of Beethoven’s Ninth Symphony alongside Cuban musicians. The HRO was the first U.S. university orchestra to play in the communist island nation since an embargo against it began in the early ’60s.

“The trickier the destination,” said Cortese, “the more we need to send Harvard students.”

He is grateful and excited that HRO will be part of the 375th celebration.

“It does show an attention to what we do. … We are going to be the live band that plays background music on beautiful images, and it’s going to be fun!”